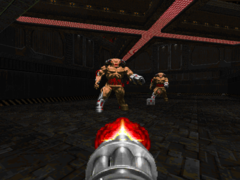 MAP09: Counteraction Terminal is the ninth map of UAC Ultra. It uses a music track "Distant Incident" by Nick Baker and Vincent Fong that originally appeared on MAP40 of Crucified Dreams. 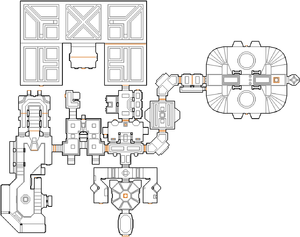 Map of Counteraction Terminal
Letters in italics refer to marked spots on the map. Sector, thing, and linedef numbers in boldface are secrets which count toward the end-of-level tally.

Grab the chainsaw and step on the pressure plate in front of you to open the walls, as well as the door. In the next area, grab the chaingun and take either path to a switch. You need to flip both switches to progress to the next area. In this area, you will notice that the side doors here require keys, so head up the stairs killing the enemies here. There are two switches up here, which will lower a revenant and a Hell knight as well as reveal two more switches. Press both of these and retrieve the yellow key. Two imps and a baron of Hell (Hell knight on Hey, Not Too Rough or lower) will appear upon picking up.

Open the yellow door to the west and progress along the path. You can climb the steps along the way and flip the switch for a super shotgun. At the end of the path, open the door and proceed along the path around the lava, being careful not to fall in as you kill the monsters in your way. The end of the path has a switch, make sure to press it, then backtrack along this path to the open area to the north. There will be a whole group of enemies if you are playing on Hurt Me Plenty or higher, so kill them and as you keep going, some walls open with chaingunners inside them, and a baron of Hell is nearby. The switches that are revealed raise steps to the chaingunner platforms, where you can get boxes of rockets. Otherwise, go up the steps here to the red key.

Be careful of some enemies appearing as you make your way back to the fork. Open the red door then kill the spectres and mancubus here, then open the next door. Keep following this path looking out for a wall of chaingunners to your side along the way, and you will eventually find yourself in a big room with a sole haymaker. Dispose of him and step on the pressure plate he was guarding. The blue key will lower, but it will take a long time; meanwhile, you will have to deal with two spider masterminds as it lowers. When the key finally lowers, grab it and press the two hand panels that the spiderdemons were guarding to leave this area. Look out for extra monsters as you head back.

Open the blue door at the fork to confront an arch-vile and several imps. The switch where the imps were opens up a wall with cacodemons and a rocket launcher behind it, as well as the door to the north. This door leads to a very large area where you will have to deal with two cyberdemons guarding a switch. After they are killed, the switch reveals the center of the large area, where a large amount of imps block the way to the exit. A haymaker will also be teleported into the area. Imps and mancubi will also teleport into the area, but only on Ultra-Violence or higher (see Bugs).

In the last room, several imps and mancubi are supposed to teleport into the final room along with the haymaker. However, the teleport destinations (things 104, 137, 202, 296, 297, and 366) are only flagged on Hard, so those playing on Hurt Me Plenty or lower will not be able to achieve 100% kills in the map.

* The vertex count without the effect of node building is 2445.