MAP09: Crown of Thorns is the ninth map of Preacher. It was designed by Darch, who also composed the level's music track, "Colonizators." 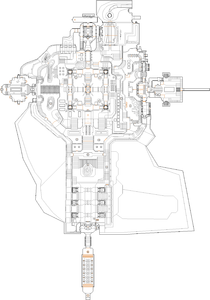 Map of Crown of Thorns
Letters in italics refer to marked spots on the map. Sector, thing, and linedef numbers in boldface are secrets which count toward the end-of-level tally.

At the start, turn around and enter the teleporter to be teleported to a random place inside the level. Your goal is to collect all three keys. The yellow key is to the west, the red key is located to the east while the blue key is found on the south of the level. For the yellow key, simply flip the switch to the east, inside its room, to lower the pillar holding it. To pick up the red key, navigate to the centre of the walkways around the structure to the east, then step on the touchplate to the west to open doors leading inside the structure.

Once inside, climb both sets of stairs on either side and grab the key at the top. As for the blue key, go to the southernmost point and you should be in front of a switch. Press the switch to its left to lower the blue key pillar, then climb up the stairs to the northeast of this area to collect the key. With all three keys in hand, enter a structure located to the north and use the switch on the east side of the northernmost wall. This will raise bars behind you, allowing access to a room with perpetually moving lifts.

Use the lifts to reach a switch to the south, then flip it. Exit this room, then go around it to see bars have opened up to the south. Approach the bars in front to raise them, then go forward, around the pillar in the centre to reach a switch on the south of this area. Before pressing it, turn around and wait for the lift surrounding the pillar to lower completely, revealing the final boss. Press the switch to make the lift move up and down constantly, then go down the stairs until you reach the fourth step from the top. Face the final boss and fire rockets when the lift is nearing the bottom of its motion. Eventually you'll manage to kill the final boss, which triggers the level to end.

* The vertex count without the effect of node building is 17223.