MAP09: Cryonics is the ninth map of Daedalus: Alien Defense. It was designed by Ty Halderman and uses the music track MM_04.MID by Rich Nagel. 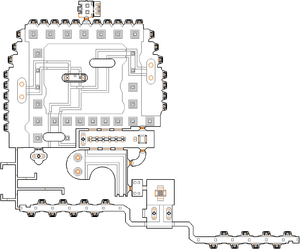 Map of Cryonics
Letters in italics refer to marked spots on the map. Sector, thing, and linedef numbers in boldface are secrets which count toward the end-of-level tally.

Beware of the chaingunners that greet you on entry, especially the one behind you. Once they have been dealt with, head right (west) from the travel tube into a small room containing two consoles and a heavy door. Activate one of the consoles to open the door - all the doors beyond this one will open manually. Follow the doors until you reach a very large chamber with stasis cells set into the walls, and a large body of water in the middle. Enter the power room (the door is at the centre of the north wall), and press the green button to open the microgen room. Take the microgen and run as fast as you can back to the entrance, as all the stasis cells will shortly be opened, releasing a large number of high-hitpoint enemies all over the map. Return to Scout Bay, via Storage and Secondary Bridge.

Until you remove the microgen from the power room, the map can be explored in a leisurely fashion, with minimal opposition.

The western pillar in the centre of the water chamber is hollow, and its entrance is underwater. Inside the pillar, a megasphere and a plasma gun can be found.

* The vertex count without the effect of node building is 4258.