MAP09: Deimos Anomaly is the ninth level of most console versions of Doom, based on the original E2M1: Deimos Anomaly with modifications made to adapt to consoles' limitations. The author of the conversion is American McGee, and the original author of the map is Sandy Petersen. The map first appeared on the Atari Jaguar, and was later ported to the 3DO, Sega 32X, Game Boy Advance, Sony PlayStation, and Sega Saturn versions. 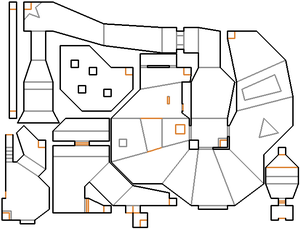 Map of Deimos Anomaly
Letters in italics refer to marked spots on the map. Sector, thing, and linedef numbers in boldface are secrets which count toward the end-of-level tally.

From the start, go straight forward past the teleporter and head east. You will come to a red inverted cross which can hurt you when you stand inside it - pass through quickly and head south to pick up the blue keycard.

Go back to the teleporter you passed earlier and step on it. You will enter a wide hallway - head south and then west to a lava pool. The bridge and the eastern platform will both fall away when stepped on, so step across quickly and head straight forward into another teleporter. In the next area, you will see a recess with gargoyle faces - press the switch on your right to lower the nearby wall with demons on it. Head forward past another lava pool and turn around to see a blue door - open the door and step on the teleporter behind it.

After throwing the switch that reveals the teleporter to the exit area, if you return to that teleporter quickly enough you will see that the back sides of the lowering walls have no textures, causing a flickering effect.

Aside from geometry simplification, a number of changes were made to this level compared to the PC version.