MAP09: Even Simpler is the ninth map of Doom 64, designed by Randy Estrella. It uses the music track "Other Side Of Madness". It is the first level to take place in Hell, and as such the sky changes from starry space to burning red with ominous clouds. It is a homage to MAP07: Dead Simple from Doom II. It is also the first main progression map to feature the mancubus (mancubi may also occur on the secret level MAP29: Outpost Omega depending on the skill level). 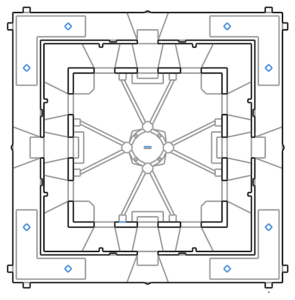 Map of Even Simpler
Letters in italics refer to marked spots on the map. Sector and Thing numbers in boldface are secrets which count toward the end-of-level tally.

You begin in a recessed pit with a switch before you. Press the switch and you will be raised into the arena. In each corner of the arena is a mancubus which you will need to eliminate. Then steps will raise out of the ground granting you access to the dark corridor that surrounds the arena, and Hell knights and cacodemons will also appear. Dispatch them and then barons of Hell and pain elementals will appear along with another corridor further back that contains more mancubi and health and ammo, but beware that each little platform the items are on will trigger a dart trap. After killing all monsters, the exit switch will become accessible in the middle of the arena.

When the invulnerability sphere appears in the center of the map, save it for when the barons and pain elementals appear en masse. This will significantly increase your chances for survival, provided you have enough ammunition in your more powerful weapons like the rocket launcher.