MAP09: Flow is the ninth map of Community Chest. It was designed by Daniel Trim (Bad Bob), and originated as MAP03 of his 2002 WAD, Redux.wad. 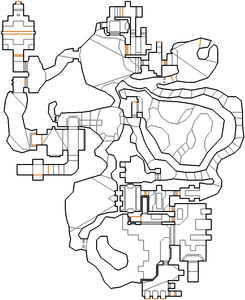 Map of Flow
Letters in italics refer to marked spots on the map. Sector numbers in boldface are secrets which count toward the end-of-level tally.

Open the first, small door from the south, and press the westernmost switch. Head outside, and into the southern room. There will be three switches here; one is under a silver bar, and two more under blue and red bars. Press the switch underneath the silver bar, and run into the tunnel to the west. Go all the way to the north of the map, and open the northeast door. Flip the eastern switch, and go through the northwest doorway. Head upstairs and flip the western switch. Go back outside, and walk through the easternmost doorway. Open the eastern door, and grab the blue key.

Head back out, enter the bloodfall tunnel to the southeast, and go up until you reach a fork in the path. Go through the southern path, and open the western wall. Return to the room with the three switches, and press the blue switch. Go back to the fork in the bloodfall tunnel. Take the western path, and go north. Press the northern switch to access a cavern. Once you enter, jump from the northwest platform to the southwest platform, and then from the southwest platform to the eastern steps. Snatch the yellow key, and jump from the eastern platform to the northwest one. Be careful in this room; if you fall into the blood pit, you will be unable to escape.

Backtrack to the room before the blue key area, and flip the yellow switch to the north. Leave the room and go through the western tunnel. Enter the southwest passage, now accessible, and use the lift at the end of the path. At the top, go through the southern passageway while avoiding the crushers. Once you make it under the third one, they will stop. Grab the red key, leave the area through the hole in the north, and return to the three switches room. Flip the red switch, and go back to the north of the map. Enter the western tunnel again, but this time, take the northwest passage. Run toward the door and it will open; trigger the switch inside.

* The vertex count without the effect of node building is 1150.