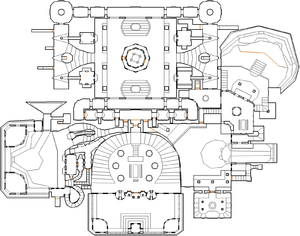 Map of Forlorn Fortress
Letters in italics refer to marked spots on the map. Sector numbers in boldface are secrets which count toward the end-of-level tally.

Enter the castle. Inside, to the west of the entrance, there is a face stone. Push it, enter the hole to the right, an elevator will bring you to a small platform, find the blue key here.

Go up the wide staircase, enter the blue door, go through the only other non-keyed door. Go up the stairs that will split but lead to the same gallery. Enter the door at the other end, try to push the figures, one of them will open. Go through and to the room before the balcony. Activate the face stone. Go back and through the second figure that has just opened. At the end of the hallway, there is another face stone to push, opening the remaining third figure. Behind it, follow the stairs to the top gallery. Jump down into the area with the river. Jump down into the room the river is running into. Climb the ladder into a small room with torches. One of the walls can be opened, revealing a teleporter that will bring you back to the bottom gallery. Go down one of the stairs to the point where they re-unite. You can now go up between them and pick up the red key.

Enter the red door (to the right/east of the blue door), you will reach another door, behind which stairs lead up to a room with fireplace and bookshelves. Go down the stairs at the eastern side of the room (not all the way to the river) and activate the red skull stone. Go back up, one of the bookshelves has opened, so you can reach a balcony with three green face stones. Push these stones, one of them will reveal a teleporter. Use it, at the destination is another teleporter to bring you back later. But first, go down the stairs, go through the door and onto the eastern balcony where the yellow key is awaiting you.

The red and blue door's hallway has yellow doors at both ends. Go through any of them, you will reach the big open courtyard in the north-west. From the surrounding hallway, four tiny balconies are accessible. In the small room leading to the south-west balcony, there is a hard to see 'X' switch on one of the bricks. When you hit it, the backside of a pillar (at the nearby top of the stairs) will open. Inside are a Hell knight and a face stone switch. Hit the switch and head to the opposite (eastern) side of the courtyard where the equivalent pillar has opened. Inside are an arch-vile and a teleporter. Enter the teleport to be teleported into the tower in the middle of the open area. Enter the round table room in the tower's center. Hit the slit eye switch. A stained glass window in the vicinity of the teleporter pillar will be smashed (by barons from the other side). This leads into a small courtyard with a soul sphere which you might have seen through windows while playing through the level. Above is an arachnotron. Jump through (possibly catching the supercharge) and defeat a baron of Hell. There is no escape from here but the door leading to the exit teleporter to the next level.

* The vertex count without the effect of node building is 3260.