MAP09: Ginipiggu is the ninth map of Slaughterfest 2011. It was designed by Daniel Jakobsson (dannebubinga) and uses the Doom II victory theme composed by Bobby Prince as its music track.

The level's name means "guinea pig" in Japanese and derives from the English, though typically the word "morumotto", from the Dutch "marmot", is used. 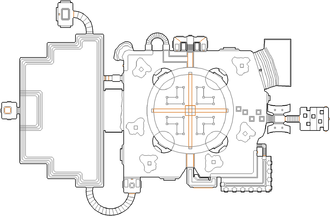 Map of Ginipiggu
Letters in italics refer to marked spots on the map. Sector, thing, and linedef numbers in boldface are secrets which count toward the end-of-level tally.

* The vertex count without the effect of node building is 1884.