MAP09: Hidden Fort (or Hidden Fortress on the intermission screen) is the ninth map of Hacx. It was designed by Anthony Czerwonka (Adelusion). 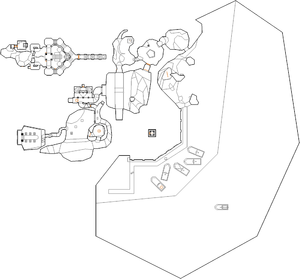 Map of Hidden Fort
Letters in italics refer to marked spots on the map. Sector, thing, and linedef numbers in boldface are secrets which count toward the end-of-level tally.

Kill one or two thugs in the garden below, take the stick and valise in the corners then head down the steps by the east wall to enter a tunnel. Follow the tunnel to a grassy area with a thug and a terminatrix, proceed east into a water stream then turn left to see an ICE and phage guarding a door. Go through the door and head round a corner to see an uzi on your left (taking it will release two or three androids), then walk east up some steps to a bridge over a river - there is a D-man at the top of the waterfall, and three androids on the rocks on the other side (replaced by two monstructs on "Let's rip them apart!" (LRTA) skill level or higher). Climb the rocks, collecting a photon 'zooka on the way up, then collect a kevlar vest and wait for the wall in front of you to lower and reveal a door.

Open the door to find a phage and some ICEs protecting a Hoig Reznator, then head west up some steps to find a D-man and one or more androids blocking your way to a cryogun and a switch. Flip the switch to raise some bars in the previous room, then go back to that room and destroy another ICE (or thorn thing on LRTA or higher) before dropping down the hole in the north-east corner to face another thorn thing and/or phage. Head outside to a rocky path and follow it south-west past two or three monstructs to reach some docks, then kill all the enemies waiting ahead (including a mechamaniac on LRTA or higher) before leaping across to the first boat - do not fall in the water here as it is inescapable. Run south-west across the remaining boats to find a teleporter, which will put you inside a water shaft - step forward and wait for the floor to stop lowering, then enter the shimmering west wall to teleport to a new area.

Open the orange door ahead to confront a monstruct, then go up either staircase to get on to a bridge. There are some steps leading down to the blue Z-key, which is on top of a pole - drop off the south side of these steps to reach a switch, flip it then go up the steps and cross a narrow platform that rises in front of you to enter a cavern. Destroy the mechamaniac waiting below, then press the hand scanner on the south wall to lower the Z-key and retrace your steps to collect it. Go back to the cavern and head down the steps to see a wooden structure on your right, enter it and press the east wall to open it, then open a second door in front of you (requiring the Z-key) to find a computer room - the level ends when you enter this room.

After entering the river near the start, follow it south until you reach some steps leading up to a tazer guarded by one to three phages, then walk up the west steps to find a molecule tank.

Once you reach the fourth boat at the docks, step back on to the dock to get a super kevlar vest.