MAP09: High-Tech Grave (spelled Hightech Grave in AUTHORS.TXT and the Infopack) is the ninth map of Memento Mori. It was designed by Thomas Möller, and uses the music track "Slipper" by Mark Klem. In cooperative play, the team of players is divided and separated from one another; Players 2 and 4 must fight through a different portion of the map and meet the other players at a rendezvous point. 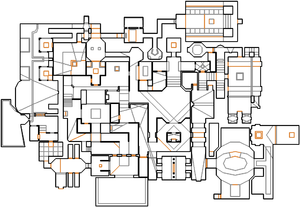 Map of High-Tech Grave
Letters in italics refer to marked spots on the map. Sector, thing, and linedef numbers in boldface are secrets which count toward the end-of-level tally.

Save your game and enter the western teleporter to land in a box of shotgun shells and a soul sphere. Press the switch and quickly leave the pad you are on to the south or east; the floor to the north and west will lower. Kill the imp on your platform, the other two imps stand on the lowering floor. Kill them and the two/two/three (on easy/medium/hard skills) mancubi safely from above. Drop down where you find another shell box, a medikit, a stimpack and a blue armor (that you save up for later if possible). Open the red door, kill the demon around the corner, push the switch, kill the chaingunner and hit the next switch. Take the lift up, kill the cacodemon and jump into the sewer; the nukage inside will rise to waist height as you run to the east. Take the branch to the south to encounter two lost souls and pick up a green armor if needed. If possible, save up the radiation suit and soul sphere for later. Return to the sewer, head north and enter the next room where originally were three barons of Hell and an imp. They were supposed to teleport away but may failed trying, so kill the present monsters. Note that there is an invisible north-to-south tripwire in the middle of the room, just between the berserk pack (save it up if possible!) and the pillar, so if you enter the room's eastern half, only walk under the northernmost or southernmost lights as the tripwire does not reach from wall to wall. Press the switch on the eastern side of the pillar to lower it, grab the yellow keycard, and carefully walk over the western edge to raise some stairs to the east. Kill two chaingunners upstairs, where you find two bullet boxes to the north and the south. From each bullet box look to the west to find each eight demons, stuck on the walls and ready to die. After wasting them you can grab a shell box at each end of dead demons' line. (The tripwire you hopefully not triggered raises the northern and southern walls, thus releasing all 16 demons that start teleporting right under the lights, next to your position.) If you saved up the items when told to do so and if you have at least 11% (5% on I'm too young to die, better 16% (7% on ITYTD) of health, return to the sewer (run!), grab the radiation suit, return to the yellow key room, get the berserk pack, then the soul sphere next to the radiation suit, after that return to the room where you teleported in to pick the blue armor up. Finally run to the yellow key room and leave it using the teleporter there, having 200% health and 200% armor. (If you are too low on health, you of course have to grab the berserk pack before grabbing the radiation suit.)

Open the red door to your south, and take the eastern teleporter. (There is no need to worry about missing secrets or items, you easily can return to this route after completing it. You even can save up the megasphere until every monster is killed to have a good start in the next map.) Press the switch, go upstairs, head east, and face the easternmost opening. Stand a good distance away from it, and do a running jump across the gap. Press the switch, leave the alcove, and backtrack to the blue section you jumped from. With a good, running start, jump across the next westernmost gap, head through the eastern opening, and open the red door. Head east, and run north to the switch. Press it, and head northeast across the stairway you have just created. Take the eastern bend, and press the western switch to raise a staircase to the northeast. Go up, and shoot the gargoyle face to the southwest to open the nearby wall. (Shooting the other will reveal the destination beyond that wall, but this is not needed.) Press the switch inside, head back out, and jump to the blue key. Backtrack to the blue section you came from, dash under the crushers, and open the blue door. Head east across the ring-shaped walkway, go north, and step onto the "teleporter." It is a fake; the room will turn dark, and a compartment will open to your east to reveal the real teleporter and some monsters. Stepping in here will turn the lights on again. Go into the teleporter.

Unblock the northeastern teleporter to return to the blue key route: Go through the red door to the south, enter the western door and ascend the stairs in the southwest. If you did so before and you pushed the switch upstairs, it seems that the topmost stair is to high to step on. (See bugs section below.) Simply walk southwest, thus hugging the western wall, stepping on a really narrow stair and climbing atop. If you did not push the switch there, do not push it as it just triggers that bug. Note the lamp in the southwestern corner, illuminating a part of the floor. Enter the lit part of the floor and leave it to the east, thus triggering the teleporter to the blue key route to unblock. As this can repeatedly be done, you can return to the blue key route anytime.

Return to the room north of the red key room, open the green door to the north, and run forward; you will be lowered into a tunnel. Go west, and head all the way south. Press the gargoyle face to the north to activate a lift, and take it up. Enter the teleporter, hit the eastern switch, and step back in. Ride the lift back down, and open both the blue and yellow bars at the south. Go up the staircase, open the door, and navigate your way around the perpetually moving platforms to the southern opening. Go east until a wall lowers to the southwest, and hit the switch there. Kill the two (four on hard skills) chaingunners behind the door in the east. Only if you are ready to finish the map, enter that door as there is no way out but exiting the map once the door closes. Press any of the four switches to exit the map.

Player 3 starts next to player 1, as described above. In order to unblock the teleporter to the yellow key route later, one of them should stay in the room where the first backpack is found, as the blue door to the northwest can only be opened from here. Players 2 and 4 start in the cage north of player 1 and 3. Open the door, follow the path around the corner to open another door. (Entering the lit part of the floor triggers the teleporter to the blue key route to unlock, see single player instructions.) Around the corner is a switch. After either using the switch here or (better) letting player 1 or 3 grabbing the backpack - both actions trigger the same function that should not be done twice (see bugs section below) - some stairs are built near the switch. Descend those and enter the next door to find yourself in the red key room, merging your route with player 1 and 3.

Unblock the northwestern teleporter to return to the yellow key route: As described above, player 1 or 3 has to wait where the first backpack is found. One of them can open the blue door from here, enabling player 2 and 4 to access this area. So each member of the team may stay here in order to unblock that teleporter after usage. Enter the room where players 1 and 3 start. (It has a window to the west, where you see the exit switch.) The trigger reaches from the southwestern corner of this room to the southwestern corner of the cage where players 2 and 4 start. Simply walk over this (invisible) line to unblock the teleporter.

* The vertex count without the effect of node building is 1708.

This level was made with DETH, DEU, New WAD Tool, and the graphic editor Improces.[1]