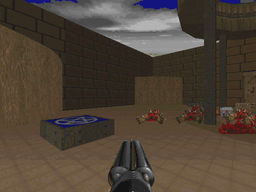 MAP09: Knockout, designed by Yonatan Donner, is the ninth map of Hell Revealed. It uses a version of the music track "Oww!!!" from Rise of the Triad that is slightly downgraded due to artifacts of MUS conversion - the pitch bends do not play correctly. 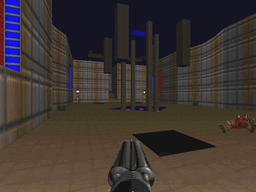 You have shown that you know how to use your weapons - can you also use your fists? Your ammo is very limited in this level - you will have to punch your way through. It can be quite hard sometimes... 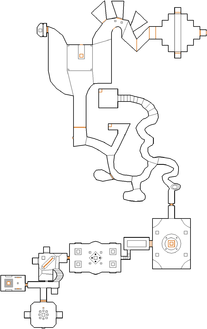 Map of Knockout
Letters in italics refer to marked spots on the map. Sector, thing, and linedef numbers in boldface are secrets which count toward the end-of-level tally.

Because of the shortage of weaponry and ammo in this level the player will need to use their fists as often as possible. Hit the pillar switch in the start room and take the berserk pack. Run forward, to the right and down the winding staircase. There is a shotgun here but be prepared for a trap revealing barons and Hell knights. Take the doorway to the east, and keep going forward until you come to a square arena in the open air. The yellow key will be visible in the middle of this area but beware-once you pick this up, a bazillion imps (no kidding) will teleport into the area. You can pick this up later if you want to avoid the conflict.

Take the doorway on the left wall. Follow the winding passage, taking the right hand path when it splits in two, until you come to a teleporter. Take the teleporter, kill the imps blocking your path and hit the switch. Teleport back. Return the way you came through the winding passage until you get to the split, this time take the path through the nukage. You'll pass one alcove to the left, a closed door, and when the path splits in two go to the left, which should bring you to a wide doorway. Head through and go northeast, which should bring you to a lift. This brings you to a diamond-shaped room with a switch on the far wall, hit that and go back the way you came. This time head to the northwest corner of the map, which has a doorway leading to the red key. Take it.

Retrace your steps back to the yellow key room, pick it up and immediately run west. Continue retracing your steps backward until you are at the passage right outside the first room. Open the door on west side of this passage, hit the red key and yellow key switches, and exit.

These areas are not counted as secrets, yet appear more or less hidden as well: