MAP09: Manufacturing Plant is the ninth map of Simplicity. It was designed by Melissa McGee (Agent Spork) and uses a MIDI rendition of the Stage 2 theme from Journey to Silius, originally composed by Naoki Kodaka, as its music track. The par time defined in MAPINFO is 4:13. 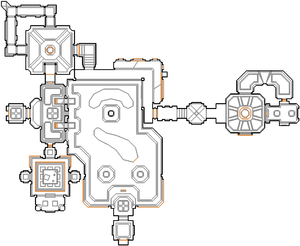 Use the shotgun in front of you to kill the imps and chaingunners ahead, including a couple behind the grates on either side, then open the north door to confront a spectre along with more zombies and imps. There is a switch at the north end of this room - flip it and kill the demons, shotgun guys and Hell knight that teleport in behind you, then step past the switch to a lift that will carry you up to a square chamber with more imps and demons. Go down the stairs on the east side to an L-shaped corridor and follow it past some chaingunners along with a cacodemon and knight (there is a super shotgun here as well), then open the split door at the end of the corridor to confront a waiting baron of Hell. Take the armor behind the baron and head forward to a chamber with imps, zombiemen and a revenant, then follow the passage east past two nightmare demons to a door. Open the door and slay two waiting revenants, then flip the switch to lower a column in the previous room and reveal the yellow keycard.

When you approach the yellow key you will be teleported back to the north-west room, where two walls have lowered to reveal revenants, spectres and demons; kill them then step through either doorway and follow the passage to get the yellow key, then return to the previous room to find that the bars around the lift has lowered. Ride the lift back down to the starting area and open the locked split door in the west wall to find a knight guarding a rocket launcher (a second knight will spawn behind you), then flip the switch to open another door behind you leading to an outdoor area. Kill the imps and cacodemons that appear in this area and grab the backpack, supercharge and any boxes of rockets you need, then flip the switch at the south end to lower the wall in front of you and reveal a cyberdemon; try to get it to infight with the imps, revenants, knights, cacodemons and mancubi that teleport in. Once all the enemies are dead, a door in the cyberdemon's compartment will open and allow you to reach the exit teleporter.

* The vertex count without the effect of node building is 1795.