MAP09: Meta Exe is the ninth map of 2048 Unleashed. It was designed by Franck Livolant (franckFRAG) and uses the music track "". 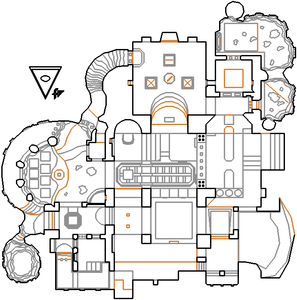 Map of Meta Exe
Letters in italics refer to marked spots on the map. Sector, thing, and linedef numbers in boldface are secrets which count toward the end-of-level tally.

Press the switch in front of you to raise the floor you are standing on then step forward and look right to see a ledge with imps. Step across to this ledge and press the switch on the north wall which will open a set of bars to your left, then go through the bars and turn left to pass between a pair of moving metal platforms and reach another switch. Flip this switch and the floor will lower - turn right to see a doorway and kill two demons and one or two revenants visible through it, then go through and turn left when you reach the door ahead to see a switch guarded by a zombieman. Flip the switch to open a set of bars just behind you, go through them and kill the chaingunners waiting on the other side then climb the steps and follow the walkway round until you step over a pair of red lights which will open the door you saw earlier.

Go through the door and climb the steps on your right to reach a tunnel with imps and zombies. Look through the windows on your right to see some imps and chaingunners, as well as a Hell knight on a platform - kill the knight then shoot the switch it was guarding to lower a set of bars blocking the exit from the tunnel. Leave the tunnel then turn right and walk into the small silver pillar in front of you to lower it, collecting the red keycard on top and opening another set of bars to the north-east leading to a passage. Follow the passage past two demons and drop into a room with three moving platforms, as well as one or two arch-viles teleporting between them. Kill both monsters then step on the east platform and look east to see a hole in the wall with a switch visible through it - shoot this switch to lower the column in the middle of the room and reveal the yellow keycard.

Take the yellow key then step on a lift in the south-east corner that has lowered - you will see the exit door in front of you blocked by three colored bars. Ride the small lift on your right up to return to an earlier room then turn right to see a set of steps leading up to an armor and a switch between two yellow key strips. Press the switch and another switch behind it to raise a platform on your left then run due south until you reach a ledge with a number of imps and zombiemen on it. Turn left and press the switch ahead of you to lower a wall and kill the knight and imps waiting behind it, then step through and immediately turn right to find a set of steps leading up to the ledge you just passed - climb the steps to find the blue keycard in a small recess, then go back down and open the north door.

As you walk through the door two shotgun guys (plus a chaingunner on Hurt Me Plenty skill level or higher) will be revealed behind you, and two chaingunners will teleport in ahead of you. Backtrack to the lift next to the exit door and step on the brightly-lit brown floor to lower it, then open the bars blocking the door and step through to get outside. Kill all the monsters waiting around the corner, including one or two knights, then flip the switch at the end of the path to lower a pair of bars blocking your way to the white exit teleporter.

As the level starts, approach the floor lamp in front of you and a rocket launcher will teleport onto the step on your right.

A supercharge and a super shotgun can be found in the yellow key room. Taking the first item will change the passage you used to enter this room into a set of stairs, which you will be able to access after picking up the yellow key.

* The vertex count without the effect of node building is 2567.