MAP09: Ochregerde is the ninth map of Community Chest 4. It was designed by William Huber and uses "Starting Out," a music track composed by Stuart Rynn (stewboy) for Plutonia 2. 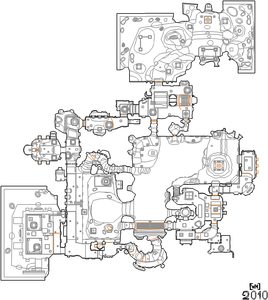 Map of Ochregerde
Letters in italics refer to marked spots on the map. Sector, thing, and linedef numbers in boldface are secrets which count toward the end-of-level tally.

Ochregerde is a level that would have fit nicely within the last 10 levels of The Plutonia Experiment - all while you're not even one-third of the way through the megawad. You are probably not going to be able to complete this level in one run if you are not ready for the myriad traps that it throws at you - some involving arch-viles appearing at the worst possible moments.

The level uses all three keys. The yellow and red keys can be collected in either order, followed by the blue key. However, it is more efficient to collect the yellow key first, then the red key.

Next, jump down the sludgefall in the southwest of the sludge pit. Again, you will find yourself in a serious crossfire between various types of enemies. Use your chaingun on the softer ones (zombiemen, imps, shotgun guys), and your super shotgun on the tougher ones (cacodemons, demons, Hell knight on platform, arachnotron (Hey, not too rough and below)/mancubus (Hurt me plenty and above) in the southwest corner). Now might also be a good time to loot a shotgun from a shotgun guy.

Once the coast is clear, climb the steps to the right (north) platform in the west. Run across the gap to the south to land on the southern platform. Head south and watch for the cage with up to three imps on the wall. At the end of the platform, turn right to enter a semi-outdoor area with two square platforms. The platform in front of you has three imps (Hey, not too rough and below), six imps, (Hurt me plenty), or two Hell knights (Ultra-Violence and above), but don't let them distract you from the real threat - the line of cannon fodder in close proximity around the corner. This line contains a chaingunner on Hurt me plenty and above and a shotgun guy in the front on Ultra-Violence and above, so don't underestimate what they can do to you!

Backtrack to the smaller sludge pit after jumping down the sludgefall. Find the metal panel in the south and flip the skull switch in the right pillar to lower it. Pull out your plasma gun (if available from previous levels) and stand on the platform facing right (west) as you ride it up. You will hear a Hell knight (Hurt me plenty and below) or a baron of Hell behind you, but you will be facing the more immediate threat - a chaingunner (shotgun guy on Hey, not too rough and below) in a cage. Gun it down, spin around and get to work on the Hell noble ahead.

Continue east and grab the armor from a niche in the next room (if needed) before proceeding into the cave ahead. A spectre (demon on Hey, not too rough and below) will charge at you, but this monster is just there to trick you into thinking that the cave ahead is a conventional series of encounters. Up ahead is the level's first "Plutonia moment" - a trap that is likely to instantly kill you if you are not prepared. Cross further into the cave, and that outer wall at the bend opens up, revealing a trap:

Head to the northwest of the starting sludge pit and climb all the way up the rock steps to a wooden door. Head through to a hall with a sludge channel running through it. As you enter, you will be attacked by up to three shotgun guys from the front. However, you also need to be careful of the spectre (demon on Hey, not too rough and below) in ambush and some imps on a ledge in the west. Head east to find a bridge, and watch for a Hell knight ahead (two on Ultra-Violence and above), up to three chaingunners in an alcove right of the bridge and an imp. Kill them and continue around to a door.

Once the red key is collected, a number of traps spring. First, a fake floor trap teleports an arch-vile (revenant on Hey, not too rough and below) into the cage north of the red key. Up to three spectres teleport to the southwest of the red key, and up to three revenants teleport to the southeast (where the Hell knights were). Cover from the arch-vile's attacks is using the two pillars next to the red key area. Clean house and backtrack out of this area as soon as possible.

Backtrack to the door you used to enter the hall with the sludge channel. As you cross the bridge, you will realise that an arch-vile (revenant on Hey, not too rough and below) has teleported in. Quickly burst it down before it resurrects the monsters in this area!

From the door, head west down a flight of steps, then into a hallway with a yellow door at the end. Watch for three imps and three chaingunners (three shotgun guys and an imp on Hey, not too rough and below). Further up you will encounter up to two Hell knights in a small alcove. Clean them up, head to the end of the hallway and open the door.

In this next room, you will find up to four shotgun guys and three lost souls. Kill them and prepare for another nasty ambush. If you have a rocket launcher or BFG9000 from previous levels, levels - pull it out now. Flip the red skull switch in the north of the room, then quickly move back to the hallway in the east. The switch not only lowers the red bars in the south, but also activates a fake floor trap, releasing up to five revenants and an arch-vile (not on Hey, not too rough and below). You need to take out this set of very dangerous monsters quickly, because there is little cover in the nearby area. Once they are dead, continue forward past where the red bars were and drop down.

After the drop, turn right into the blue key chamber. It is packed with enemies, with up to ten imps, a chaingunner (shotgun guy on Hey, not too rough and below), and two strong monsters (two Hell knights on Hey, not too rough and below, a Hell knight and a mancubus on Hurt me plenty, two mancubi on Ultra-Violence and above). Clear them out, get the blue key and immediately run out of the chamber and hug the lowering bars on the right (south). A number of monsters will teleport in near the entrance of the blue key chamber, and you don't want to be stuck anywhere near them when it happens:

Head out the bars, and you will find yourself back on the northern ledge in the lower sludge pit below the sludge fall. Head up the steps into in the northeast into a tunnel. As you cross the bend, the inside wall opens up to reveal up to three shotgun guys. The chaingun should handle them easily. Continue forward to a skull switch and flip it twice to lower the blue bars ahead. A demon will teleport in ahead - kill it. Jump back down into the starting sludge pit.

Head to the tunnel in the southeast of the starting sludge pit. Flip the switch and ride the platform up, and prepare for a massive test of your skills. When you ride the platform up, you will be greeted by up to nine zombiemen, up to three imps and a shotgun guy beyond a window ahead, an imp in a corner (Hell knight on Ultra-Violence and above), up to six imps and a chaingunner on a nearby raised area and an arch-vile (revenant on Hey, not too rough and below). If you have a plasma gun or BFG9000, now is time to let rip - if not, you'll just have to cling on to dear life with your chaingun and pray that the arch-vile doesn't initiate and connect its attack through a horde of monsters.

Clean them up and step into the exit teleporter to end the level.

Collecting the level's sole rocket launcher, perched on a pillar in the lower sludge pit, is a fairly involved task. However, besides netting you a powerful weapon, it also is necessary for 100% kills.

From the starting sludge pit, proceed as if you were heading to the exit area (you will have to deal with all the monsters as per normal). When you reach the ledge with the exit structure, head southeast into the sheltered area, but instead of going north to the switch, go west and drop into the shaft in the southwest. This drops you into the higher raised area you saw earlier in the corridor, from which the imps were attacking you. Heading south triggers a trap in the east of the raised area, with a Hell knight and an imp (revenant on Ultra-Violence and above). The Hell knight will immediately teleport out of its trap into a position blocking the passageway in the south, so be careful.

Head into the corridor in the south. As you step into it, the outer wall of the corner opens up, revealign up tot hree imps, a shotgun guy and a chaingunner. Continue down the corridor to a room with a switch (this is the room behind the window you saw after riding the platform up to this area earlier). Flip the switch, and the windowsill lowers. A wall in the west of the lower corridor also lowers, and a trap opens in the south of this room, with up to three chaingunners and a Hell knight. Jump north back into the lower corridor, and kill the imp (hey, not too rough and below) or demon (Hurt me plenty and above) released from beyond that wall in the west.

Head west and cross the bridge. At the end of the bridge, drop into the rock shaft. Kill the shotgun guy and zombieman on this perch (if they are still there) and run across to the pillar to collect the rocket launcher. Note that the rocket launcher triggers a teleport trap with two cacodemons and a pain elemental (one cacodemon and two lost souls on Hey, not too rough and below) to teleport into various spots in the lower sludge pit.

* The vertex count without the effect of node building is 13121.