MAP09: Overflooded with Ideas is the ninth map of Avactor. It was designed by Eradrop and uses the music track "". The par time defined in the DEHACKED lump is 75:00. 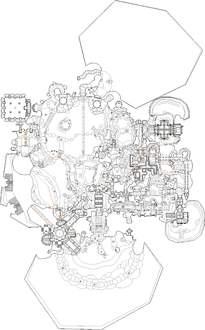 Map of Overflooded with Ideas
Letters in italics refer to marked spots on the map. Sector, thing, and linedef numbers in boldface are secrets which count toward the end-of-level tally.

At the start of the level, there's a security armor near the ship to the east. Continue going east to find two energy cells and some secluded stairs that lead to a room with a plasma gun. Taking it will trigger a revenant ambush.

Two obstacles (Things 4815 and 4816) have no flags set for any of the three difficulty classes, so they do not actually appear in the level.

* The vertex count without the effect of node building is 36918.