MAP09: Phobos Subversion is the ninth map of Doom 2 Reloaded. It was designed by Andy Stewart (eschdoom). The par time is 7:00. 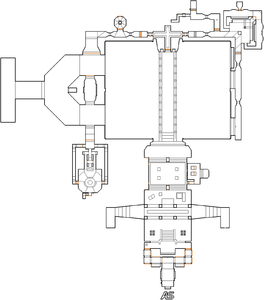 Map of Phobos Subversion
Letters in italics refer to marked spots on the map. Sector, thing, and linedef numbers in boldface are secrets which count toward the end-of-level tally.

This level plays a lot differently than your standard Doom level. You have to quickly get through as much of this level as possible before a massive horde of monsters warps in and prevents you from finishing, and you have to ensure that the horde is directed to the big crusher platform you see on your way. To do so, you need to do two things. The first is to collect the blue key, which is accessible in the northeast part of the map. The other is to make sure that no monsters teleport to the bridge. This is harder to do, as it involves running to the southwesternmost room, which is opened by a switch to the south of where the blue key is located. Then, go through the water room, flipping the switch at the end, then backtracking all the way to the northwest part of the map, where you can finally enter a small room. This switch will actually move a wall in the monster teleporter closet down so that enemies will not teleport to the bridge. With both of these things done, return to the big crusher platform and use the blue key on the door here. Enter this room to find four buttons. The ones on the sides raise up the walls, ensuring that no monster escapes the big crusher platform, while the two floor panel buttons activate and deactivate the crusher. Activate the crusher here with the green button and wait as the enemies all get crushed; eventually the wall behind you will also lower all the way, allowing you to get the yellow key and leave this level.

On some source ports, while using the crusher to get rid of the monsters, it is possible that the ghost monster bug may come into effect. This is due to the arch-viles that spawn into the level on higher skill levels. It may be a safe idea to not activate the crusher just yet until you kill off all the arch-viles that spawn in to prevent ghost monsters from being resurrected. One arch-vile spawns in on Hurt Me Plenty, while up to eight spawn in on Ultra-Violence or higher. The BFG9000 from Secret #2 can help in eliminating the arch-viles.

* The vertex count without the effect of node building is 1561.