MAP09: Sabbath Sewer is the ninth level of Memento Mori II. It was designed by Mark Klem, who also composed "Disposition," the music track used in this level.

As with several other levels in this WAD named after heavy metal bands and songs, "Sabbath" is perhaps named after the band Black Sabbath.

We appear to be in some sort of inescapable hole inside the city. My shotgun lies on the ground from where I dropped it when I fell in this hole. You know, like those idiots do in the movies.

We managed to pry up a manhole cover and toss it aside. This is the only way possible to get any further.

There is an old abandoned church here that is accessible from the sewers. Heavily gaurded [sic] and they ain't preaching the gospel.
The church holds a super shotgun and some major health provisions.
The exit is here, but will require a blue key.
Better get movin'; there's no time to pray. 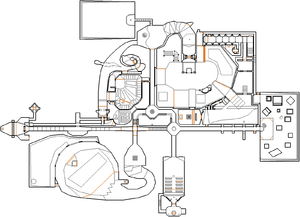 Map of Sabbath Sewer
Letters in italics refer to marked spots on the map. Sector, thing, and linedef numbers in boldface are secrets which count toward the end-of-level tally.

Fall into the pit. In the sewage tunnels turn right at the first intersection and then right again at the second one. At the end of the hallway there is a big room with a crescent-shaped ceiling. Entering this room is enough to open a new passageway (it is not necessary to step on its tiled floor, just go through the entrance marked with wooden pillars), so enter it, turn around, return to the second intersection, choose either path and notice that two portions of southern walls have disappeared. Press a switch which has become accessible. It will open a new path in the second intersection, which will now have four ways instead of three. At the new entrance there are silver bars to your left (southwest) and a switch to your right (north). Press the switch and run past the temporarily open bars. Behind the bars there is a room with walls covered with vines, as well as a maze-like ceiling. Go to an alcove (located at the northern end of the room) which will lower like an elevator. Press the switch and ride the elevator back up. Press the western switch to open the bars once again, allowing you to return to the sewage tunnels.

Go again to the room with a crescent-shaped ceiling. Turn left (west). Walk to the red skull key, even though it is standing behind two columns and is temporarily inaccessible. A portion of wall to the east will open, revealing a curved stairway leading down. Pull the lever and return to the red key. Pick it up, return to the room with the crescent-shaped ceiling, go straight (east), up the stone stairway to the red key door. Open it, fall down to a huge waterfall area and find the only staircase leading to its upper level on your right (north).

Climb the stairs. Go to a set-up yellow skull key which will disappear upon approaching it, but a new passage will open instead. Turn right and go to the teleporter. It will warp you to a tower, after which you will be standing on another teleporter pad. Turn around and enter it. You will return to the second intersection in the tunnels, but now you will be able to go south. Head south until you see a large pool of slime and a second yellow skull key on the top of an elevator. Take the radiation suit if necessary, lower the elevator, take the key and head into a newly revealed teleporter in the eastern side of the ledge surrounding the pool of slime (where the radiation suit was standing). It may take a few seconds until the ledge will rise.

You will be warped to the sewage tunnels again. Go straight, open the yellow key door, pull the lever at the dead end and press a switch near the southeast corner. A wall will open to the northeast, revealing a short L-shaped hallway with a teleporter at its end. Take it to be warped to the waterfall area again. Now you don't need to climb up the stairs as there is a new passage straight ahead (south east). Turn right (west) to a blue room, press the only switch and head to the northeast. Go down the staircase, go straight until you find a red brick portion of the wall blocking your further path. Walk around it by turning left and then right and press a skull switch which will open the aforementioned red brick wall. Fall down, turn left and pick up the blue skull key lying at the end of the hallway.

Turn around, go right (a new thin hallway will be revealed), enter a teleporter, go left, climb up the stairs and go through the bars (there is a glowing arrow at the floor pointing at the only set of bars which can be passed through). Turn right, then left to the church, open the blue key door and fall down the pit to exit the level.

In order to get 100% of the items, in the exit room, you have to walk carefully over the pits edge from the north, paying attention not to fall down. Slowly walk (counter)clockwise around the edge southwards, always hanging half above the abyss. As you step on the pit's easternmost (westernmost) edge, you should hear the room's eastern wall lowering, revealing a soul sphere. Immediately stop moving as walking to far southwards exits the map. Grab the soul sphere and once again slowly walk over the pits edge from the north, this time falling down onto the soul sphere resting on the ground. After grabbing it, move southwards to exit the map.

This level is one of the few in Memento Mori II that can be completed in under a minute. The reason for this is a death slide that can be performed in secret #11 by killing yourself with the rocket launcher while running backwards, with your weapon aimed at the northern wall and your back facing the southern half of the exit hole. If done correctly, the blast will fling your corpse through the window, and across the exit linedef, ending the level. The linedef is located inside the southern half of the hole rather than its outer sides, so your aim must be true, lest you miss the exit. The fastest way to obtain a rocket launcher is to do so through secret #1.