MAP09: Scorching Savanna is the ninth level of Resurgence. It was designed by Josh Sealy (Joshy) and uses the music track "The Face of Wrath" by Stuart Rynn (stewboy), composed specifically for the level. According to Resurgence's text file, this map was originally designed for Back to Saturn X, but was rejected due to not matching up to the quality of other maps. 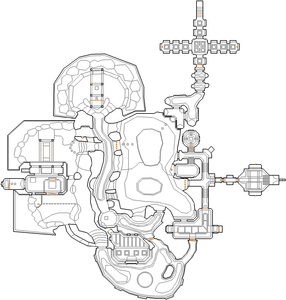 Map of Scorching Savanna
Letters in italics refer to marked spots on the map. Sector, thing, and linedef numbers in boldface are secrets which count toward the end-of-level tally.

Grab the items at the start, then kill the monsters around you, making sure to retrieve both the shotgun and chaingun from their respective zombies as soon as possible. Go left along the blood river, and after you pass the blue bars, pick up the rocket launcher on the right. If playing on HMP or any higher skill level, be careful of the spider mastermind in the main area, which is visible from many points along the upper section you start in. Kill the mancubus and go down either of the narrow passageways. Kill the monsters in the next area and pick up the super shotgun. Look for a switch on the north-west wooden pillar, and press it. This will raise some small steps in front of the red skull key's platform. Go up the steps and take the key.

Go back along the blood river, and carry on past the starting position. Look for the red bars on the right hand side, and open them. Go through them, and into the large cavern on the other side. Clear the area of monsters, and look for the plasma gun and energy cell packs in the brown artificial structure on the right. Take these, then press the adjacent switch. One of the rock supports in the cave will have opened, revealing a large number of imps on the inside, and either one or two arch-viles, with the second appearing on UV and NM only. At the center of their hiding place is the yellow skull key. Kill all the monsters, and take the key.

Now head to the western end of the cave and look for the staircase bloodfall. Go up it and clear the monsters in the next area. Watch out for chaingunners and an arch-vile in the next segment of this area. Once the monsters have been rid of, drop into the blood pool on the north side of the metal bollards. Go into the building, but be ready to run back and take cover, as an arachnotron will appear right in front of you, and a cyberdemon will appear on the upper level to the left. The easiest solution to killing the cyberdemon is to use the super shotgun to damage it, then hide behind the sides of the entrance for cover. Once you have killed the cyberdemon, go up the lift, then go left and through the narrow opening to the small balcony where some chaingunners were standing. Press the switch here, then re-enter the building and turn left. Kill the chaingunners on the platform, then go up onto the platform and press the switch. Be careful of the arch-vile that teleports into the building as you do this. Additionally, a small alcove will open in the building, containing three revenants.

Cross the metal bridge that has now risen on the north side of the building. Go into the cave and press the switch on the right-hand wall. This will lower one of the wooden columns back outside, meaning you can now take the blue skull key. Do so, then go up the staircase bloodfall ahead, and drop down the hole at the top. This will bring you back to the blood river at the start of the level. Now clear out the central area, focusing on the spider mastermind first. Once you have cleared the area, look for a tunnel entrance made of brick in the lower part of the central area. Enter, and head over to the large gargoyle switch opposite. Press it, and it will disappear into the ceiling, allowing you to move forward. As you enter the next area, some mancubi will appear on the sides of the canal. Kill them and the arachnotron, then press the switch at the end of the canal. Kill the monsters that emerge from the two traps, then press the switches inside each of the traps. This will open the bars that closed behind you as you entered this area. Be quick though, as the bars will close again after a short period, and you will have to press the switches again to re-open them. Turn right and go up the stairs. As you round the corner, look for the stairs on the left and go up these too (note that these are blocked off by yellow bars before you lower them from the area you just came from). Press the switch. This will raise some wooden pillars near the blue bars and the spider mastermind's island.

Now go forward and drop down into the lower part of the central area, and look for a staircase bloodfall allowing you to get back into the river that runs through the start area. Go up this and turn right. Open the blue bars if you have not done so already, then cross the pillars, and into the well. Kill the trio of whichever monster type is waiting for you at the bottom, then follow the river past some chaingunners, and into the dark area at the bottom. As you enter this dark area, some revenants will rise out of the blood in front of you. Kill these, then kill the arachnotron at the end of the passage on the left. Have your rocket launcher ready, and press the switch at the end of the passage. A passage opposite your own will open, containing six barons of Hell and fourteen Hell knights. Clear them out using the rocket launcher, then press the switch at the end of their passage. Now go back along this passage and kill the chaingunners on the right. Go along their passage to exit the level.

* The vertex count without the effect of node building is 3328.