MAP09: Steep Drain is the ninth map of 1000 Line Community Project. It was designed by Justin Kelly (Breezeep) and uses the music track "Rusty Nails" by James Paddock (Jimmy), originally used in Speed of Doom. 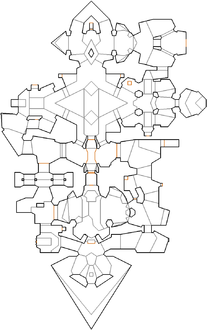 Map of Steep Drain
Letters in italics refer to marked spots on the map. Sector, thing, and linedef numbers in boldface are secrets which count toward the end-of-level tally.

Push past the zombiemen in front of you to collect a chainsaw then go forward until you see a lift opposite a water pool containing a chaingunner and other monsters. Ride the lift up to a river with a mancubus on the opposite side and head east until you pass a yellow key door guarded by zombiemen and imps, then head north until you drop down a waterfall. Continue following the river west (you will see a revenant or arch-vile teleport to the top of the waterfall you just walked over) to a step with a shotgun on it, then head through either of the north doorways to a diamond-shaped structure with mancubi on it. Head east until you drop down another waterfall to an area with a spectre and some zombies, then go up the steps and turn right to find a button that will lower the nearby platform that had the mancubus on it. Get on the platform and ride it up until it stops moving, then run north to land on a ledge with a teleporter.

The teleporter will send you to the northern-most area of the level, near the exit door. Kill any waiting zombies and imps then head east to a hole that leads down to another water pool with imps and a mancubus. Go to the east wall of this room to find a switch between two candelabras and flip it to lower a lift to the south holding a revenant, then step over this lift and go round the corner to another hole which will put you on a ledge above the chamber east of the diamond structure. Turn right and step into the teleporter ahead of you, then step forward to raise a bridge leading to the door in front of you. Go through the door and press the button behind it to lower the wall - you will find yourself back by the river near the starting point. Head due south and drop down the lift to find that a column has lowered revealing the yellow keycard.

Ride the lift back up to the river and head east to the yellow key door you passed earlier; open the door and step on the teleporter behind it to enter an enclosed room with one or two chaingunners, press the button on the west wall then step back into the teleporter again and go back through the yellow key door to return to the river. Head west to find that the water level has lowered creating a hole leading down to a room with spectres; after going down the hole, head north to a metal fence guarded by chaingunners and go round it then continue north to drop into another water-filled area (you will hear a wall open on your right). Head north-west past a spectre to enter a tan area with zombies then turn right to find a button that will lower the neighboring wall as well as the water around the diamond-shaped structure. Once the water has stopped lowering, head due east past the structure to return to a previous area then continue east to a water-filled room where a waterfall has lowered to reveal the blue keycard along with a revenant and an arch-vile.

With the blue key, go back to the button you used earlier to lower the triangular lift and press it again, then ride the lift up and run north to the teleporter that will send you to the northern-most area. Drop off the ledge then turn left or right to see the exit door, open it and kill a waiting revenant then press the red button here to finish the level.

A shotgun and armor can be found due west of the starting point.

A super shotgun can be found in the middle of the diamond-shaped structure, which you can reach using either of the triangular lifts.

A midgrate (linedef 882) behind the yellow key door with teleporter pad does not have the impassable flag set, allowing players to walk through it and fall down.