MAP09: Stronghold is the ninth map of TNT: Evilution. It was designed by Jimmy Sieben, with minor additions and touchups by Ty Halderman, and uses a music track shared with MAP01: System Control.

The level is notable for having many enemies. This sheer number of monsters almost entirely consists of hitscan-employing troopers, sergeants and chaingunners, who will often take potshots at the player from balconies and through windows. The somewhat confined layout of the map also adds to its difficulty. 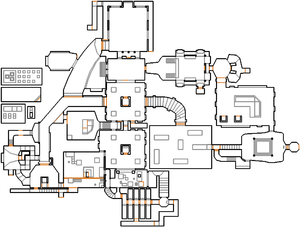 Map of Stronghold
Letters in italics refer to marked spots on the map. Sector, thing, and linedef numbers in boldface are secrets which count toward the end-of-level tally.

Head to the UAC-door on your right in the starting area (the windows with former humans are optional to visit). In the next room, you can see a locked door ahead. To open it, head upstairs on your right, turn around and flip the switch. Head into the open door. In the brick corridor, head right. Open the brown door (if you make any noise here enemies may already open the door, so use the barrels to your advantage). Go left and into a closet with a switch. Walls to the right and behind you will lower. The wall near you contains a shotgun guy (or nothing depending on your skill level). The wall behind you now leads you to a crate room. Ignore it for now. Flip the mentioned switch and head back to the previous brick corridor. A wall near the entrance has opened. Flip the switch to activate the lift going down to the laboratory. Eliminate everyone here (a chaingunner is at the southwest in this room, be careful). There are two switches to press. The left switch accompanied with blue "tei tenga" display builds the stairs up to a medikit and two small windows from where you can overlook other rooms and shoot the enemies. This one is optional to press. The one on the right which is accompanied with green display is required. Press it.

Backtrack using the lift to the aforementioned crate room. If you, for the first time, decided to visit this room you may notice that the brown pillar in the center of the room now became silver. Kill everyone here (use the barrels to your advantage). Lower the silver lift in the center and activate a switch at the top. This will build the stairs in the room. Use the stairs to get to the top of the tall wooden crate. From this crate jump over to the crate with the red keycard.

With the red key, go to the long brick corridor. A wall is open now (a mob of enemies is unleashed now). Enter it and rise to the room. Flip the red switch in the south of the room. Get back to the brick corridor. Head to entrance from where you entered here for the first time and lower the metallic bars to a darker room. Press the red key switch to open the door. Enter this door leading to the second, similar to this, room. Head into the cargo room south. Climb on the crates to get to the west of the room. Enter a very narrow passageway and open the door. You are now about to open five doors here. Behind each one is an enemy. When you reach a room with a backpack be careful, as crowds of monsters will be in front of and behind you. Rise on the stairs and jump over to the crate with the blue keycard.

With the blue key, head back to the first dark room. Press the switch in the center of the room and flip another switch behind that requires the blue key. A wall will open in the north of the dark room. Enter this room and open a door to your right as you enter. This will lead you to a nukage room. Get to the east of this room by taking any border on either side. Walk around the wall and use a silver lift. This will lead you to a room with a green switch. Press it and backtrack to the first dark room.

In the dark room, open the blue door, go down and enter a large room. Grab anything what you need here and head into the eastern passageway up the stairs. The exit door will be ahead. Enter it and press the switch to end.

* The vertex count without the effect of node building is 1746.