MAP09: The Cage is the ninth map of Sunder. It was designed by Insane_Gazebo and uses the music track "Industrial," originally composed by Simon Judd (sirjuddington) for Hellcore 2.0. 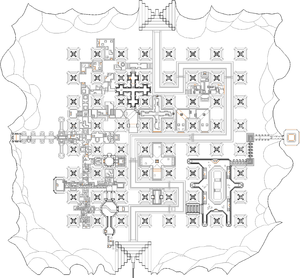 Map of The Cage
Letters in italics refer to marked spots on the map. Sector, thing, and linedef numbers in boldface are secrets which count toward the end-of-level tally.

You will immediately notice in this map that all monster encounters will come by teleporting in, except for the beginning group of enemies. Take note of the blood here as well. It is damaging, but you will not be able to get out if you fall in. The enemy encounters will have you dodging often, but keep watch of your surroundings so you do not accidentally fall.

Shoot the switch to begin. The super shotgun, rocket launcher, and chaingun are available from the beginning. Press the switch and kill the demons in front of you. An arch-vile is just behind the stairs here, and attempting to climb the stairs causes enemies to teleport onto the ledges above. You will have to contend with imps, Hell knights, chaingunners, revenants, and a baron of Hell. Take the steps to the northern ledge when done, and go north and press the gargoyle switch. A second set of steps will be accessible allowing access to the southern ledge, so take these and move east towards the satyr barrier, then south. Climbing the next set of steps near the satyr barrier triggers imps to teleport in both behind and to the west. A plasma gun is to the east, so take it and continue.

Lower the door to the south and prepare for the next battle. To the south, north, and east, enemies will teleport in, including revenants, imps, two Hell knights, and three mancubi. To the east is the blue door; make note of it for later and continue south. Climb up and head back down where you will notice that the south and east paths are blocked. Go west up the steps, but be prepared for more ambushes. Cacodemons will teleport both in front and behind you, while a cyberdemon is on the far ledge to the west. You need to get up there of course, but watch your footing while fighting everything. The switch on the cyberdemon platform opens the way southward.

Keep climbing the steps, preparing yourself for enemies showing up to the south, east, and west. Imps will spawn to the west while cacodemons spawn near a locked door to the east. Revenants, barons of Hell, and Hell knights will show up to the south, and the switch on their ledge opens the locked door. Past the locked door, head south and notice the gargoyle barrier. Attempt to climb the steps leading south for revenants to appear in cages. The revenants will respawn inside any cage that gets emptied, but they will eventually stop, so get rid of them all and continue climbing up. Press the satyr switch at the end of the steps and go back to where the gargoyle barrier was. Press on the brown square to teleport further back, which is near where the plasma gun was. Head north to find the satyr barrier from before has been lowered.

Past the satyr barrier, you can go in any number of directions, but most areas are currently locked off. Going directly east from the barrier and up the steps will allow you to reach a soul sphere nearby, as well as teleport imps behind the wall of torches to the east. A blocked off switch is over here. If you head north from the barrier, you will notice another block below near a staircase with armor bonuses on it. This also has a blocked off switch. The way to the north is also blocked, so you will have to go east here. Be cautious as you climb the steps past the megasphere, as two cyberdemons will spawn in, one at the top of the steps and one on the ledges from before. You need to get rid of both of them. At the top of the steps will be another locked door to the east and a switch to the west of it. Use this switch, then return to the blocked off switch at the bottom of the staircase of armor bonuses. After using that one, go back to the one where all the imps spawned in and use it as well. This set of switches will open the path to the north. Before entering the teleporter here, there is a soul sphere and a megaarmor you may need.

The next set of battles will be in close quarters, teleporting from one platform to the next. After taking the first teleporter, approaching the next one will cause four barons of Hell to attack. The next area will have five barons of Hell for you to defeat. The last area will be a tad bigger, but you will have to fight six barons of Hell and three revenants to defeat. After this area will be a path south and east along with another teleporter, which only just takes you back to the start of this part. Head east into the crossroads and notice the blue key is to the north.

Head south from there and look west for a satyr switch. This will lower the door leading back to where you fought the two cyberdemons, in case you need to head back. Now approach the soul sphere and get ready to fight yet again. Near the door, two cyberdemons will appear, while demons will show up in the blood rivers to the south as well as in the crossroads from behind. You may want to take out the cyberdemons as quickly as possible, and then flush out the demons afterwards. When that is done, head to the blood rivers and go right to an invulnerability. Notice the doors here. The one furthest to the right without skulls on it can be directly opened. Do so and enter this new area. Go to the northeast and press the switch on the east side of the metal column, you will have to wait for the next switch on the northwest metal column anyways as you are attacked by Hell knights, revenants, eight mancubi, four barons of Hell, one arachnotron, and two cyberdemons near the entrance. After pressing the switch on the northwest column, the door to the southeast will be open, allowing you to continue up the blood river.

When the river is blocked off to the north, go west to the next area where you will fight cacodemons and four pain elementals while a switch lowers to the north. Use the two teleporters here if you need to get a temporary escape. When the switch lowers, use it to lower the gargoyle barrier to the west, grab the soul sphere, and continue on the blood river. Take the next set of steps down and go all the way west to a megaarmor and a switch, which will open the door you passed on the way there. This door leads straight to the blue key. After taking it, take the nearby teleporter to go back to the start, where imps and revenants will teleport on the high ledges, signaling exactly where you need to go: the blue door. Past the blue door, an invulnerability is to the north. Climb the steps to the east all the way to the top and use the satyr switch. Head back to the previous room to fight a cyberdemon, then head south. Three energy cell packs are to the southeast, get them and continue southward, then eastward.

Take the lift up to be back at the blood river, but on the south side this time. Head east until you cannot do so anymore, then head up and get the BFG9000 and ammo. Press the switch to lower the northern walls, and head into the cross-shaped arena. You will have to press four switches on the central column to open the way further northward, while enemies will continue to teleport in from the left and right sides, including revenants, barons of Hell, Hell knights, imps, two chaingunners, and two arch-viles. Two invulnerabilities will be in the room, and will prove helpful to getting through this battle. Note that each switch except the last has a waiting period, so when you can, make sure to press each switch.

When finished with this area, continue northward to the second cross-shaped area. This one will have the same monsters as last time, but they will all teleport into the center of the lava. Again, there are two invulnerabilities to help you out, they are at the left and right in this area. Make sure to press the switch at the north end here, and then the switch at the west end when it becomes available. You will eventually be able to leave this area for the final challenge.

Head east into the last arena. Take note of this place, it has megaspheres at the top and bottom ends, two invulnerabilities in the middle, three large cages in the center, and four teleporters that can be used to get around enemies. To start, go to the megasphere at the north end and press the switch. The cages will be populated by three spider masterminds, while the various nooks will have revenants, Hell knights, barons of Hell, imps, five chaingunners, and five arch-viles pouring out. The invulnerabilities in the middle should be used wisely, and the teleporters are there if you are surrounded. When it becomes available, press the switch to the south, and the bars to the northeast will lower. Follow the path to reach the exit.

* The vertex count without the effect of node building is 14488.

According to Insane_Gazebo, the map was inspired by a dream in which he witnessed a giant cage housing a slumbering giant beast.