MAP09: The Gambit is the ninth map of Doom 2 the Way id Did. It was designed by Richard Frei in the style of Sandy Petersen. The par time defined in the DEHACKED lump is 2:00. 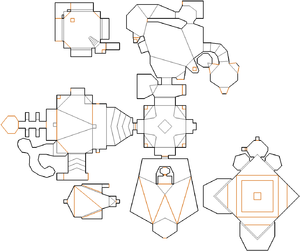 Map of The Gambit
Letters in italics refer to marked spots on the map. Sector, thing, and linedef numbers in boldface are secrets which count toward the end-of-level tally.

In the starting area you can see four teleporters in each corner of the area. Use the south-eastern one which is white.

Enter the red door in the starting area. Come to the northern switch on the computer panel. Flip it as many times as the small platform nearby would be on the right height level, so you could get into the alcove by walking on this platform (you should jump on it only when it is in rising progress, otherwise it will go down and you should do it all again). Once, at the alcove, press the button and jump down then head into newly open wall south. Inside, press the switch and Quickly enter the nukage teleporter. Now, step back right into the rising platform which allows you to get to the western side. Once it is on the right height, jump off west. Take the yellow key in the very west. Traps will open.

Get back via the door you came in. If the platform in the center of the room prevents your way, just come closer to it.

In the starting area, use the last door. It requires the yellow key.

Use either corridor and in the very end, press the skull on blue wall. This will temporarily lower the wall behind that prevented your way to the exit. Enter the exit door and press the switch.

* The vertex count without the effect of node building is 532.