MAP09: The High Rise is the ninth map of H2H-Xmas. It was designed by Pavel Hodek and uses the music track " ". 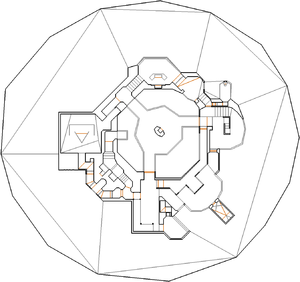 Map of The High Rise
Letters in italics refer to marked spots on the map. Sector numbers in boldface are secrets which count toward the end-of-level tally.

There is no red key in this level. However, when you open the second blue door that leads to the exit switch and enter the room, the door closes behind you. This side of the door requires the red key. The door does open after thirty seconds have passed though.

* The vertex count without the effect of node building is 736.