MAP09: The Launch Base (Harmony)

MAP09: The Launch Base is the ninth map of Harmony. It was designed by Thomas van der Velden (t.v.) and uses the music track "Mercury Stripes, Blue Mess" by Kyū. The par time defined in MAPINFO is 5:35. 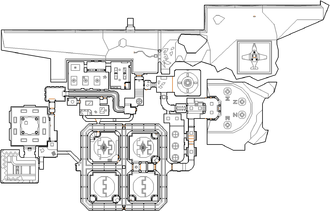 Map of The Launch Base
Letters in italics refer to marked spots on the map. Sector, thing, and linedef numbers in boldface are secrets which count toward the end-of-level tally.

If you are low on health, it may be sometime before you get a medikit. As such, be careful.

* The vertex count without the effect of node building is 4415.