MAP09: The Moat (called Mount Mentzer on TeamTNT's secrets list[1]) is the ninth level of Icarus: Alien Vanguard. It was designed by David Hill (Mentzer). 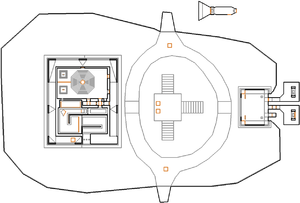 Map of The Moat
Letters in italics refer to marked spots on the map. Sector, thing, and linedef numbers in boldface are secrets which count toward the end-of-level tally.

Open the wall at the end and you will appear in a black room. There are three doors on the east wall, and you just came out of the northern one. Take the southern one to a teleporter. On the other side, go through the passage of lights, and it will darken while enemies teleport to your location. Continue down the path towards the soul sphere and a door will open. Press on the lift to the left and go through it into the dark room. Inspect the blocks to the far left and a switch will appear on the northern wall. Flipping it lowers the southwest structure, revealing another switch. This opens the central column and a switch to the right. Flip this one to depress the ground around the pillar with the red key as well as lower the other structure. This one also has a switch, which opens up yet another switch to the southeast. Flip this one to reveal a shotgun guy to the south as well as lower the red key pillar. Look out for the cacodemons that appear, and grab the key to open a door leading to another lift (it is not the same one you entered the room from). Take this lift up and then open the blue wall and the door behind it to appear on the top floor of the building. Go all the way around counter-clockwise until you find the teleporter, which takes you to the central battlement of the map. When you teleport here, the blue key is directly behind you and the yellow key is on the other side of the stairs. Grab both keys, then climb the steps up and take either teleporter to go back to the starting building. Head through the yellow and blue doors to the exit teleporter, and then exit by pressing the furthest panel on the right.

* The vertex count without the effect of node building is 805.