MAP09: The Nectar Flow is the ninth map of Ancient Aliens. It was designed by Josh Sealy (Joshy) and uses the music track "The Demon's Serenade," composed by Stuart Rynn (stewboy). The par time is 16:00. 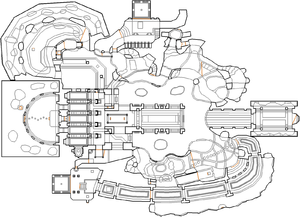 Map of The Nectar Flow
Letters in italics refer to marked spots on the map. Sector, thing, and linedef numbers in boldface are secrets which count toward the end-of-level tally.

Start by heading north, dealing the the multitude of zombiemen, shotgunners, chaingunners, demons, imps, revenants, and Hell knights. Turn left and run around the moat, grabbing the super shotgun along the way. Head up the stairs and go right, finding yourself on the balcony above the moat. Take the elevator in the center of the structure behind you, and at the top head left to a switch that will allow you to progress. Go back down to the balcony, and through a new doorway to the east. In this large area, you'll find a couple of switches which require both the red key and yellow key. You can acquire them in either order.

South of the switches, you'll find a lift flanked by two green lights. Take this lift up and follow the path given. Eventually you will find yourself in front of a large pit. Drop down into it, go into the alcove and to the east you'll find a switch to raise a platform allowing you to cross the pit. Take the lift to the west back up and cross the gap. Follow the pulsating lights on the ground and run directly between the two green torches to fall into another pit.

This time, run along the river until you trigger an ambush with a cyberdemon in front of you and a swarm of monsters behind. Retreat and find the switch to unlock the bars behind the cyberdemon. You will need to hurry, as the bars are on a timer. Once beyond the bars, head up the stairs but beware of the two archviles that will appear behind your left and right sides. The one on the left guards the switch that will lower the red key. Grab it, and use the cracked wall on the other side of the room to access an elevator. This will take you back to the first lift near the green lights.

Head to the stairs in the northeastern corner of the main area. Deal with the revenant trap after you climb them, then run through the waterfall to a cave on the other side of the texture. Follow the path along until you face a set of chaingunners guarding a switch. Pressing it will raise a wall behind you, so enter there. Move through the caves here until you can drop down behind the fence seen on the balcony near the start of the map. Moving around back here will lower the wall to a group of demons and cacodemons. Going into this area and walking down the stairs will pop up three archviles. After grabbing the yellow key, climb the nearby stairs up onto the ledge, then head to the elevator on the other side. This will take you back before dropping behind the fence. Head back up the stairs and use the odd tech texture to expose a path back to the balcony near the start of the map.

Once you've acquired both keys, hit the switches to drop some supplies, as well as raise a wall to the east. This will also teleport in a spider mastermind and three archviles. Past them, walk through the corridor and grab the blue key. This will trigger another ambush. Head back to directly west of the red/yellow switches and you will see a lift to a wall marked with a blue door pillar. Open this door and run across the risen pillars out the window, which exits the level.

* The vertex count without the effect of node building is 4974.