MAP09: The Pit is the ninth map of Doom II. It was designed by Sandy Petersen and uses the music track "Into Sandy's City". The par time is 4:30. 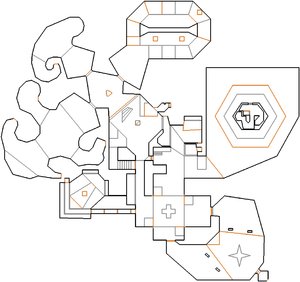 From the "+"-shaped platform in the center of the sludge, lower the lift to the north and ride it up. Continue straight to the end of the corridor and flip the switch at the end, raising a chunk of the floor behind you. Ride the nearby lift up, flip the switch at the top, and jump across to the raised floor. Creep along the east wall and into the raised corridor now reachable via the newly heightened floor. Head outside and kill the enemies. Return to the previous area to find that a new section of wall has opened up. Flip the switch here to lower two more walls, unleashing a monster ambush. Once the last of the enemies have been dealt with, flip the last switch in the western alcove to open the nearby wall. From where you are, drop down onto the Hell knight's platform and flip the switch. This causes a stair to raise, allowing you to reach this platform from below as well. Walk off this platform and a nearby lift will lower, allowing you to get the blue keycard. Open the blue door back on the platform and flip the switch to open the northwest wall. Climb the stairs and hop through.

Inside this next area you'll be faced with a three-sided switch. The west and southeast faces open optional areas, some of which contain secrets. Whether or not you decide to explore them, you'll ultimately need to flip the northeast switch, which opens the southwest wall. Drop into the nukage pit and go left into the stone tunnel. Flip the switch to lower another platform in the nukage area, and step onto it before it rises again. Pick up the yellow keycard in the back, then turn left and flip the switch at the end of the short tunnel. This lowers the third platform in the nukage pit, so once again drop down and get on before it rises. Flip the last switch, located on the wall, to lower the first platform once again. Ride it back up to the three-sided switch room. Open the southeast wall of this room as you would a door, and head all the way back to the platform you started the level on.

Once back in the starting pit, lower the east or south lifts and go through the yellow door at the top. Kill the enemies in your way and drop into the darkened pit. Pick up the health bonuses on the bright red cross, then head through the exit door and flip the switch.

The star area near the exit has several occurrences of the bad seg angle bug. It was this location where this bug was first properly identified as one distinct from slime trails.

This map has so many lost souls placed in it that pain elementals cannot spawn any more lost souls until some of them have been killed. This is due to a limit in the engine to avoid endless spawning of lost souls that would crash the game.

* The vertex count without the effect of node building is 513.

The official French name of this level is Le Puits.