MAP09: The Plague Warrens is the ninth map of Project Einherjar. It was designed by Mike MacDee (Impie) and uses the music track "". 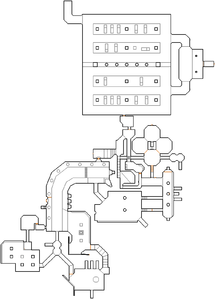 Map of The Plague Warrens
Letters in italics refer to marked spots on the map. Sector, thing, and linedef numbers in boldface are secrets which count toward the end-of-level tally.

The first half of this map is light on ammo and requires real survivor skills to get through in one piece. The first thing Juno witnesses is a Shieldmaiden being devoured by a pack of Worgs, which turn on Juno next. The exit tunnel is visible beyond a mesh fence, but the entrance is locked behind a yellow switch.

Through the two cramped sewer tunnels is the yellow key, but upon grabbing it the water level drops and several monsters attack. The upper level of the sewer is now unreachable, but a new area is now accessible: a long, wide tunnel with a switch on the upper catwalks. Take the left fork in the tunnel to watch another gruesome scene of man-versus-Worg, then climb the stairs to the catwalks and hit the switch. Beware the Mommybot ambush when you reach the switch.

The switch creates staircases in the previously inaccessible tunnels, allowing Juno to return to the yellow switch and reach the exit tunnel. Once she kills the Stepchild guarding the elevator, Juno will finally have access to a decent ammo supply. She'll need it for what awaits beyond the elevator.

The final area of the map is an indoor parking garage, which quickly becomes the scene of a massive shootout. The first Thor guards the red key, required to access the exit elevator.

Thor appears in different areas depending on the difficulty setting: on easier settings he stands just outside the exit door, isolated from the big shootout. On harder settings, he's in the garage, adding to the havoc therein.

Thor moves almost twice as fast as a normal Einherjar, and usually fires a pair of Dessler rockets that kill in one hit and have a massive blast radius. Occasionally he fires laser beams in a wild, full-auto spread. The many vehicles cluttering the garage make for great cover against his rockets, but they are just as good at tripping you up while trying to avoid his fire (or catching a rocket that was flying past you, hurting you with splash damage). He can take as many as ten rockets to put down. He drops the red key when killed.

This is the first reused map of the mod. Several Episode 2 maps were originally made for an unfinished Hacx add-on, then used again in an unfinished Operation Body Count mod, before finally being finished and added to Project Einherjar.