MAP09: The School (Whispers of Satan)

MAP09: The School is the ninth map of Whispers of Satan. It was designed by Paul Corfiatis, who also wrote the music track for this level, "Max It Out". 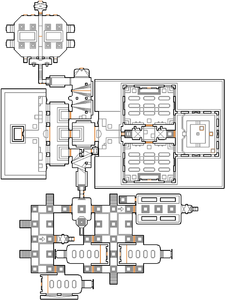 Map of The School
Letters in italics refer to marked spots on the map. Sector, thing, and linedef numbers in boldface are secrets which count toward the end-of-level tally.

Kill the monsters and open the door that is in the middle. Go through the yard here looking out for cacodemons. Open the next door and kill the mancubi in this hallway. There are three doors for you to take. You need to enter both of the side doors first. Each one leads to a classroom with lots of zombies and a baron of Hell, and each one has a switch on the chalkboard. Make sure to press the two switches in the two classrooms, then open the central door in the hallway. With both switches pressed, you will be create a walkway to the yellow key. Look out for pain elementals that come in when you grab it however.

Return to the starting point and open the yellow door this time. Go south to the lift and flip the switch to head down. There are two doors here, and you will see that the red key is atop a pillar. Enter the left door to find several hallways, and although there is an arrow pointing straight ahead to the next door in front, ignore it for now and head right to find four more branches in the hallway. There are two classrooms, accessible from either left or either right branch, with zombies, a Hell knight, and a switch inside. Be sure to press both switches in both classrooms, and then return to the door that had the arrow pointing at it. Enter and grab the blue keycard. Now return to the room with the red key and take the blue door. Here is a similar hallway, so kill the monsters here, and ignore the door with the arrow pointing at it. Head to the far door that has a chaingunner guarding it to enter another classroom, similar to the ones you saw earlier. Press the switch here, looking out for imps inside the room and arachnotrons in the hallway, then head back to the door with the arrow pointing at it. Open it to find a Hell knight, a medikit, and a switch with red bars around it. The switch lowers the key, so press it, grab the key, and take the lift back up.

Return to the starting point and take the red door. In the next room, approach the northern wall and it will open, revealing monsters and a switch. Press this switch to open the door next to it, revealing an arch-vile and another lift. Flip the switch to lower the lift and you will be in the penultimate area. Kill the enemies present here, and then shoot the switches to build a bridge to the exit door (it is best if you go from left to right). As you cross to the exit, look out as cacodemons and lost souls could appear around you.

* The vertex count without the effect of node building is 3398.