MAP09: The Siege II is the ninth map of Hell Revealed II. It was designed by Jonas Feragen and uses the music track "Short Circuit" by Sam Woodman. It is a concept level where the player, after escaping the first part of the level, must fend off a legion of hellspawn advancing upon a small fort until the exit is accessible. 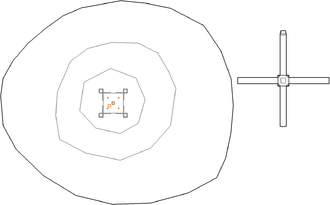 Map of The Siege II
Letters in italics refer to marked spots on the map. Sector, thing, and linedef numbers in boldface are secrets which count toward the end-of-level tally.

You are in the middle of a cross-shaped area, with plenty of rockets and a rocket launcher at your disposal. Use it to kill the spectres and imps to the sides of this room. Afterwards, head for the south end of the cross for a gargoyle switch, which reveals a teleporter at the north end.

When you teleport, you will end up in a siege situation. There is an arch-vile in your immediate vicinity, and outside of your fort are masses of various monsters who will converge on your location. Pay special attention to the cacodemons and pain elementals, who can actually enter your fort, and do your best to dodge revenant missiles and other projectiles. There is plenty of ammo at your disposal, but only four megaspheres, so conserve your health as much as you can. While doing this, the exit teleporter lowers, and after approximately four minutes or so, you will be able to exit.