MAP09: The Transformer is the ninth map of Community Chest 2. It was designed by Christoph "Graf Zahl" Oelckers, and was originally released standalone. 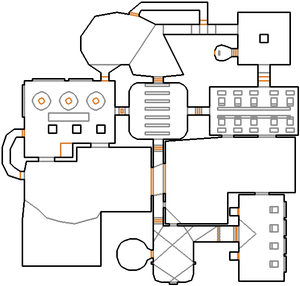 Map of The Transformer
Letters in italics refer to marked spots on the map. Sector, thing, and linedef numbers in boldface are secrets which count toward the end-of-level tally.

Go straight until you reach a central four-way intersection. Go left at this point and open the metal bar. Here, the red skull key is resting on a silver wall. Press this wall to lower it, then go back to the starting point and open the red bars there. In this control room, flip the switch to open a compartment containing the blue skull key. Now go back to the four-way intersection, and you can head either north or east to find the blue door which holds the exit in the northeast corner of the map.

Things 0 and 1, floor lamps in the starting room, are partially wedged into the eastern and western lights, and will flicker in and out of view when seen from different angles.

Thing 90, a sergeant in the eastern work station, is stuck within the back of a chair.