MAP09: Tower of Total Crapness is the ninth map of 32in24-5, a deathmatch megawad. It was designed by Walter Confalonieri (daimon), detailed by Matt Cibulas (RottKing), and uses a music track from Kung-Fu Master, composed by Koji Kondo.

It was one of the earlier maps made for the project, with the initial layout submitted six hours into the session. 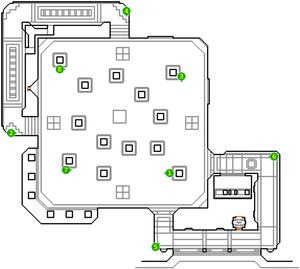 Map of Tower of Total Crapness, cropped to only show the playable area 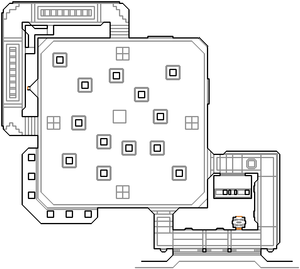 Map of Tower of Total Crapness, cropped to only show the playable area

Tower of Total Crapness is a small map centred around a large outdoor square arena, filled with marble towers with demonic iconography mounted atop stone plinths. Most of these have some shotgun shells on two sides of their bases. Along each wall of the arena is a short marble platform with a super shotgun. A box of rockets is available in the south-west and north-east corners, while a green armor and two stimpacks can be found in both the north-west and south-east corners. Interestingly, an invulnerability sphere is placed behind the bars on top of the wall in the south-west corner, although it is inaccessible and out of sight. Along the western wall of the arena, between the corresponding super shotgun and the north-west corner is a small alcove with a switch that temporarily lowers a marble platform in the centre, which has a BFG9000 placed on it.

Two hallways constitute the rest of the map, covering the north-west and south-east corners of the map area. Neither hallway leads to any significant areas, with both ends attached to the central arena. The north-west hallway is accessed from the midpoints of the north and west walls of the central arena. This hallway is quite dark, though parts of it are illuminated - these parts are also lined with rockets. The rocket launcher itself can be found sitting in the corner of the hallway. Close to the corner is a short, narrow tunnel that ultimately leads to a soulsphere. This tunnel has two entrances, one each side of the corner.

* The vertex count without the effect of node building is 868.