MAP09: UAC Base is the ninth map of 10 Sectors. It was designed by Kinkajoy and uses the music track " ". 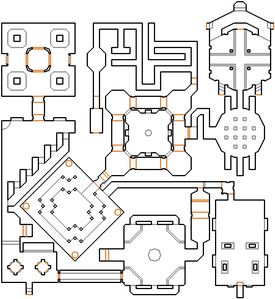 Map of UAC Base
Letters in italics refer to marked spots on the map. Sector, thing, and linedef numbers in boldface are secrets which count toward the end-of-level tally.

At the start, pick up the backpack and take either lift down. Kill the zombieman and take the lift on the opposite side up. Kill the shotgun guy and take the next lift you see down, then take the next lift up. You should see three chaingunners at the top. Take the lift in the northeast down and you will be in a dark maze that flashes periodically. At the very first fork right next to the lift, head left. Follow the path to the next fork, where there is a super shotgun to the left. Keep going straight at that fork, and again straight at the next fork. Past the four imps, use the lift to ride up, then press the switch. Now backtrack through the maze and take the lift up to the blue floored rooms, where the center area is open, with several zombies and the blue key.

Go back to the starting position and open the blue door. The lift goes down into a room with a baron of Hell in the center (a Hell knight on Hey, Not Too Rough or lower). Navigate through this room around the fences; you will have to shoot barrels that are in your way. You will head through a dark alley which leads to a door and a lift. Ride it up and head to the next room with a rocket launcher in the middle and several chaingunners hiding in the corners. You cannot obtain the rocket launcher just yet, for now, head through the portal to the west.

You will emerge in a room with imps and cacodemons. The central structure here holds a backpack. Head south, across the lifts to the next room with tech columns and caged enemies. Continue south and you will find a portal, which takes you to the rocket launcher platform. Backtrack to the alleyway and you should see a new path open. Take the lift in this path up to a room with demons, spectres, and the red key. With this key, backtrack all the way to the starting point in the center of the map. Head for the eastern part of this area, which has the red door. Follow the path behind it to a dark room with demons, barrels, and spectres. Head north from this room and hit the switch to lower several lifts with enemies on them. Dispose of the enemies then ride either the northwest or northeast lifts up to find the yellow key.

You will now have to backtrack to the rocket launcher room, so do so. The yellow door is in the southwestern chaingunner compartment; use the back alleyway to reach it. Kill the cacodemons in the next hall and you will find the exit room, with a baron of Hell and some imps nearby.

In the red key room, it is possible to end the level prematurely. Just before the alcove where the red key is located, right on the step, if the player presses use, the player exits the level.

* The vertex count without the effect of node building is 1181.