Vesperas is a map that is part of the Master Levels for Doom II. It was designed by John Anderson (Dr. Sleep), and is contained in the file VESPERAS.WAD. In the PlayStation Final Doom port it is the last level of the Master Levels episode and uses the music track "Sanity's edge". Completing the PSX version leads to MAP14, the first map of TNT: Evilution, with all weapons and game status retained. 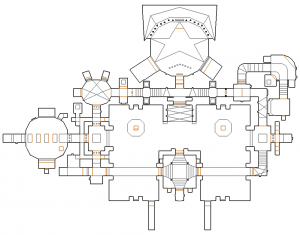 Map of Vesperas
Letters in italics refer to marked spots on the map. Sector numbers in boldface are secrets which count toward the end-of-level tally.

In the starting area (A), use any of the three doors. The western one offers the fastest route. Use either of the two western lifts. Get to the west side either through the central room or along the corridor. The bars open automatically. Step out a bit to the nukage pool (B) to open alcoves both in the north and the south. There is a narrow and invisible ledge that runs from the east side to the southern alcove. Go to the alcove and press the button before you (it will be highlighted as you approach). Grab the yellow key.

The key lies at the northwestern room. Leave the nukage pool area and go to the north side where there are yellow bars. Open them. Go to the eastern room, and a lift will lower. When you go down, press the switch at the southern alcove. The wall at the west will open. Grab the red key.

Go to the east. Walk down the staircase and up the other. The gargoyle button to the left requires the red key, so you can press the button. Drop down, turn around and press the button to lower the stand with the blue keycard. If you grab the key from the south, bars will rise as if blocking your way. Merely go around them and use the lift to get back.

Return to the beginning area (A) and press the switch indicated by blue lights. Beware and kill the revenant and press the exit switch for the end.

Differences between PlayStation and PC versions[edit]