MAP09: Wormhole Zone is the ninth map of Plutonia 2. It was designed by Adolf Vojta (Gusta), and uses the music track "Battle Strategy" by James Paddock. The par time defined in MAPINFO is 4:30. 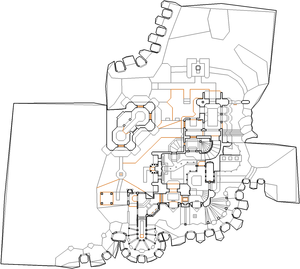 Map of Wormhole Zone
Letters in italics refer to marked spots on the map. Sector numbers in boldface are secrets which count toward the end-of-level tally.

Just like in some of the levels before, you will be attacked by several monsters. Before you can do anything, make sure to kill all the monsters that you can. The level's nonlinear nature gives you several paths to take. You will get the blue key last, since you need the red and yellow keys to access it.

When you are ready, from the starting point, head east into the water then climb the nearby steps. Go across the water, and keep going across the water and up some waterfalls until you reach the red skull key.

From the red key, jump through the nearby window and you should see a pain elemental surrounded by barrels. He is on top of a soul sphere. When you pick it up, look out as an arch-vile and revenants will teleport in. Keep going west, looking out for the batch of chaingunners and imps that pop up, and you will find a baron of Hell and several other monsters guarding two switches: red and yellow. Northwest of those switches is a lift and a window. If you look out the window, you can see a ledge you can jump to with armor bonuses. Jump to it and follow the armor bonuses to the yellow skull key. Look out for revenants teleporting in once you get the key.

Head for the lift near where the yellow key was so you can return to the two switches. With both keys, press the switches and you will open the way to the blue skull key. Kill the arch-vile, grab the key, and look out because chaingunners will teleport around you, while other monsters will be present in other areas of the map. Drop back down to the field where the yellow key was and go north, then east to the green shack with the yellow bar. Open the yellow bar, grab the BFG9000 and soul sphere, then climb the stairs up to the next yellow door. Open it and open the blue bars to the left. Kill any enemies on the catwalk and then open the next door. In this room, kill the revenants and go through the south door to find the exit.

* The vertex count without the effect of node building is 2390.