MAP10: A Proud and Booming Industry is the tenth level of the first episode of Back to Saturn X. It was designed by Paul DeBruyne (skillsaw), and uses the music track "Coal" by James Paddock. The par time is 3:45. In the official add-on version, this level's name is A Guide To Dynamite Carnivores. 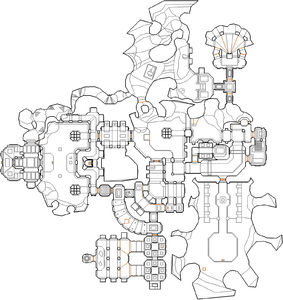 Map of A Proud And Booming Industry
Letters in italics refer to marked spots on the map. Sector, thing, and linedef numbers in boldface are secrets which count toward the end-of-level tally.

Use the shotgun at your feet to kill a waiting imp, then follow the path north and west until you reach a chainsaw between two locked doors. Drop into the nukage pit below and run north to a step with a chaingun, then continue on to an outdoor area with some crates - watch out for a few demons that teleport behind you. Head east to some fenced steps overlooked by a mancubus and climb them to reach a T-junction, open the south door then push past a few zombies to reach a lift. Press the up button in the lift to go up to the next floor, open a door on your left then climb some steps to find some imps guarding another door. Go through the door and follow the walkway round to a third door, open it and kill some approaching imps, shotgun guys and cacodemons before heading south to a mancubus protecting a super shotgun. The switch on the south edge of the platform will lower a pillar behind you holding the red keycard, but you will have to fight some mancubi, lost souls and more cacodemons to get to it.

Go back to the walkway and drop into the nukage trench below, then run west to collect a radiation shielding suit before going over a nukage-fall to land in the starting area. Activate the lift on the west side of the pool to climb out, then open the red key door in the south wall to enter a corridor with some imps and shotgun guys. Pass through any of the archways on the south side, clear out any imps and chaingunners that are released from a closet in the south-west corner, then go through the south or west doorways (the west doorway has some crates for you to climb) to enter a curved passage lined with circuit panels; the blue keycard is in the middle of this passage protected by an arachnotron, and when you pick up the key you will have to contend with an arch-vile that teleports in.

Go back to the starting area and open the blue key door in the west wall, then push past an imp to reach a second blue key door and open it to confront a Hell knight. Follow the fenced walkway north and west to enter a cavern, then push past a couple of imps, spectres and a knight to enter a stone room where two arch-viles (three on Ultra-Violence and Nightmare skill levels) are waiting; use the plasma gun in the center of the room to clear them out, then pull the switch on the west wall to open a door behind you leading to a ledge with revenants and barons of Hell as well as a rocket launcher. Flip the switch on this ledge to lower a pillar in front of you holding the yellow key, then head back through the cavern (where a pack of imps, zombies and revenants/knights have been released) before following the walkway east and south to the yellow key.

From the yellow key, continue following the walkway south to a locked door and open it then head up some steps to another door which leads back to the blue key area. Go to the end of the curved passage to open another yellow key door and slay any chaingunners and revenants waiting behind it, then enter the lift on the west side and press the red button inside it to go down to the exit chamber. One or two arch-viles will teleport in as you step off the lift, and some compartments containing lost souls (plus cacodemons on Hurt Me Plenty or higher) will open as you advance into the chamber; fight your way to the door on the west side and open it to find an imp guarding the exit button.

Before entering the red key area you will come to a walkway above a nukage trench. Drop into the nukage and head north to collect a supercharge.

After passing through the second yellow key door you will enter two ring-shaped rooms. On I'm Too Young To Die and Hey Not Too Rough, you can find a BFG9000 and an energy cell pack at the south end of the rooms along with a pain elemental.

* The vertex count without the effect of node building is 5120.