MAP10: Anarchist Dream is the tenth map of Hacx. It was designed by Ryan Rapsys. 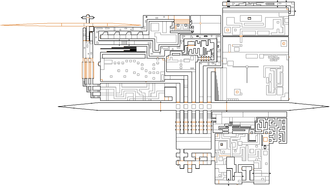 Map of Anarchist Dream
Letters in italics refer to marked spots on the map. Sector, thing, and linedef numbers in boldface are secrets which count toward the end-of-level tally.

Drop down the hole in front of you to lower a lift with a cryogun, then turn right (east) and walk through a laser beam in front of you to open the wall ahead. Continue east to a large room with walkways over pits then run due south, dropping down two levels to a silver floor with an inhaler. Run east across an electrified floor and get on a lift that lowers, then look south and wait for the lift to start rising again - near the top you will see a switch in the wall that you need to shoot. Enter the hallway in front of you and turn left to kill a phage, then head past it and turn left again to find a switch that will raise a walkway nearby. Dispose of any thugs waiting on that walkway and run across it to a ledge with a pulsar, then run north past this hazard to some steps that lead up to a hypo on a green floor - stepping on it will activate a crusher trap. There are five doorways in this area - go through the right-hand doorway on the north side and head straight forward until you see a turning on your left, enter it then go right and right again to find a switch at the end of a tunnel.

Go back to the green floor and walk west to drop into a pit, then run west (avoiding the electrified floors where possible) until you reach a square gray platform with a column. Flip the switch inside this column to lower a walkway behind you, ride it up to get back to the starting area then follow the passages west and north until you reach a large hall with some androids. There are five passages ahead, but run through the western-most passage first until you cross a gap and enter a green tunnel, then go round the corner to enter a hall with several walkways over an electrified pit. Kill a monstruct waiting on the other side along with a few thugs that emerge from an alcove behind you, then cross the pit to see three doorways in front of you. Go through the north doorway and follow the passage past an android until you drop down to the floor below, then head straight forward to find another android defending a switch. Pull it then retrace your steps to a teleporter that will return you to the walkway room - cross the walkways again and head through the middle doorway this time, then follow the path north until you can run across a pit to find two thugs (and an ICE on "I am immortal" skill level or higher) guarding another switch. Pull it and head back to another teleporter that also goes back to the walkway room, cross the walkways again then head through the south doorway - there is another path here that leads past more androids to a third and final switch in this area.

Use the teleporters to return to the walkway room, then head back to the five silver passages - enter the second passage this time and follow the path north into another green tunnel, which will take you to a tall room with many square platforms over water. Pick off the thugs standing on some of the platforms, then start stepping across them to get to a switch in the north-east corner that will raise a walkway on the west side of the room. Continue across the platforms to get to that walkway and flip the switch in the alcove ahead, then head back to the room with the five passages and go into the middle passage now - you will come to a room with some green platforms over a pit of damaging sludge. Destroy any waiting androids then carefully cross the platforms to reach a button in the west wall; after pushing it, proceed east through a door that opens to enter a tunnel with flashing lights then follow this tunnel east, north and west past some thugs, an ICE and a few buzzers. You will come to a dead-end passage that has one to three thugs inside it, and when you enter this passage a wall will open behind you, revealing a terminatrix guarding another button.

Push the button then retrace your steps to the five passages and enter the fourth passage this time - you will enter a long, winding tunnel that ends at a bright red wall, which lowers when approached to reveal thugs. Head west into a larger room with some more thugs as well as some large crushers, then continue west into a passage with more crushers - time your run through this passage, using the alcoves on the right if you need them, to reach a button on the far wall and push it. Now go back to the five passages and enter the eastern-most passage, then head forward to a green tunnel and go round the corner to confront a gang of thugs waiting on a floor below. You will be in a large room full of large blocks - make sure to dispose of the monstruct in the south-east corner and a majong 7 in the north-east corner before you explore. Climb up the brown blocks on the east side to get to the monstruct's platform and flip the switch here, then run west to get on a red lift that lowers and ride it up to a teleporter. The teleporter will put you on a structure with three narrow ledges - take the west ledge (on your left) to reach a terminatrix guarding another switch and pull it, then drop down to find that a walkway has risen from the lava pit to the north. Step on this walkway to raise another ledge to your right, then step over to that ledge to lower a red lift to the south-east; catch this lift before it rises then run east past a pulsar to get to the majong's platform, where you will find one more switch.

The last switch will raise a third walkway over the lava, allowing you to cross into a hall with a large crusher in the center - step past this crusher to kill a thorn thing waiting in the north-east corner of the hall, flip the switch inside the light column on the north (which has a second crusher around it) to open a wall at the north end of the room, then head for the green teleporter in the south-west to get to a ledge behind that wall. Climb up to the thorn thing's platform and go through the doorway here to a red tunnel, which you can follow west past a pulsar and some thugs into darkness, where the level will end.

* The vertex count without the effect of node building is 2394.