MAP10: Atlantis Rising is the tenth map of Community Chest 3. It appears to take place in a water treatment facility. It was designed by Will Hackney, and uses the music track "Nothing So Cruel" by Mark Klem from Memento Mori II MAP19: The Shaft. Permission was granted by Klem for Hackney to use the track.

In spite of using colored keycard borders around certain doors, the level does not contain any keys; to progress through the level, the player must find switches marked with each of the three keycard colors to open doors marked with the same color. The level is also more noticeably cramped than in other levels in the megawad, sometimes to the extent of hindering movement. 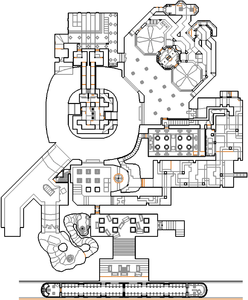 Map of Atlantis Rising
Letters in italics refer to marked spots on the map. Sector, thing, and linedef numbers in boldface are secrets which count toward the end-of-level tally.

* The vertex count without the effect of node building is 7595.

The original title of this level was Basic. After the developing level turned out not to fit this description, it was renamed to its final title.