MAP10: Base Blaze is the tenth map of Hell Revealed II. It was designed by Yashar Garibzadeh and uses a music track by Sam Woodman. 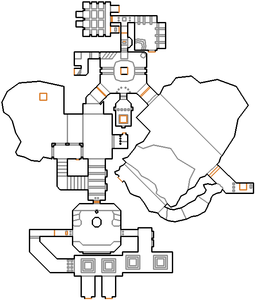 Map of Base Blaze
Letters in italics refer to marked spots on the map. Sector, thing, and linedef numbers in boldface are secrets which count toward the end-of-level tally.

Grab the nearby shotgun and kill the imp. The switch opens the door, and leads into a small hub. Get rid of the enemies inside, then press the gargoyle switch on the eastern side of the central column. This lowers the red keycard; pick it up and then open the red door. You will find the blue keycard, now open the blue door to find the yellow keycard. To open the door where the yellow bars are, press the gargoyle switch on the left side of the central column and the door will open. Enter the teleporter to be whisked to a vent to the north. Head straight and your path will be blocked by a lion switch. Press it, turn around and then head right to a room with caged shotgun guys and a Hell knight. Grab the berserk pack and hit the satyr switch to open the way to the next door. Enter and kill the mancubus, then press two switches. You will be locked in, forced to fight revenants until the bars leading out open. When they do, head south in the vent, through a new opening until you return to the hub. Kill the imps and barons of Hell that teleported in, then open the red door again.

You will find that the small room behind the red door has opened up to an outside area. Kill the arachnotrons, then climb the steps killing the barons of Hell until you reach a switch. It opens a wall to the east, with imps and another switch; this one removes bars blocking the door near the steps. Open this door, kill the enemies inside, and shoot the lion switch behind the bars to open the ones behind you. Follow the path, raising two sets of bars and crossing the water to the other side of the lion switch. Use this one, and then head back to the hub, looking out for the cyberdemon. Open the blue door to find another new outside area full of imps. Open the next door and cross through the cavern to appear on the ledge where the barons of Hell were. The switch here raises the bars so you can exit the map.

* The vertex count without the effect of node building is 1047.