MAP10: Bloodbath is the tenth level of Plutonia: Revisited Community Project. It was designed by JC Dorne and uses the music track "Symbiotic" by John Weekley (PRIMEVAL), a rearrangement of Doom II's "Adrian's Asleep" by Robert Prince. The par time defined in MAPINFO is 1:30. 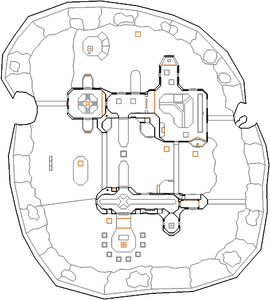 Map of Bloodbath
Letters in italics refer to marked spots on the map. Sector, thing, and linedef numbers in boldface are secrets which count toward the end-of-level tally.

The music on this level will not play if using a port without true MIDI support. This is because the MIDI files are too large to be converted to MUS by Vanilla Doom's MIDI2MUS converter.

This level is inspired by the fourth, sixth, and fourteenth levels of The Plutonia Experiment. It was constructed in one week, using Doom Builder.