MAP10: Bridge is the tenth level of Icarus: Alien Vanguard, set on the bridge of the Icarus exploration cruiser with a trio of recreational facilities behind it. It was designed by Ty Halderman and uses the music track "Slow Evil" by Tom Mustaine. 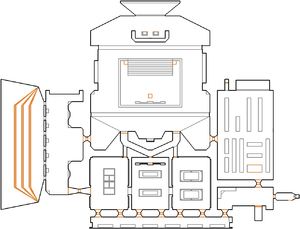 Map of Bridge
Letters in italics refer to marked spots on the map. Sector, thing, and linedef numbers in boldface are secrets which count toward the end-of-level tally.

This map is non-linear, and you just need to find the red key to exit. It is in the northern part of the map at the large bridge room behind the black wall. After you get it, head for the exit which is in the room south of the big computer room east of the bridge. If you are coming from the starting point, it is the first door on the right. The exit door is marked as "PLANET EXIT" and again, press the furthest panel on the right with the red key to leave the map.

Like on other levels in Icarus with teleporter exits, you can win with a suicide exit. You can use the rocket launcher to blast yourself off the Comstar computers with your back to the teleporter, but the fastest method is to use monsters. To pull this off, you must run toward the exit while a hitscan attack kills you, causing your body to slide under the barrier and into the exit. It is easier to perform on Nightmare!, where enemies attack more often and can swiftly reduce your health to the amount needed. On lower skill levels where they do not, you must also have the cacodemon bite you to accomplish this.