MAP10: Candlecove is the tenth map of Valiant. It was designed by Paul DeBruyne (skillsaw) and uses the music track "Fallen Sun," originally composed by James Paddock (Jimmy) for Reverie. The par time is 9:00. 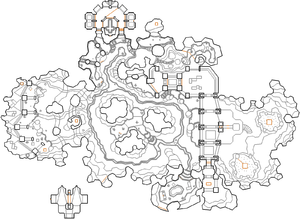 Map of Candlecove
Letters in italics refer to marked spots on the map. Sector, thing, and linedef numbers in boldface are secrets which count toward the end-of-level tally.

Follow the path in front of you to a super shotgun; you will also pick up a regular shotgun as you step off the starting pad. Dispose of two or three revenants that rise from the blood, then head up the narrow steps behind them and head straight forward (west) past a mancubus before dropping down to an island with an armor. The center area of this map consists of a looping path running round a large island - head round to the south-east side of this path, dodging mancubi, cacodemons and arachnorbs on the way, then go up some steps to the island and turn left to find a satyr switch guarded by an arachnotron. The switch will raise two blood pits to the west (which contain techno lamps for easy identification) - cross these pits and push past some more arachnotrons to reach dry land, then walk north to find another satyr switch you can press.

Pressing the switch will lower a teleporter to the south, but will also allow shotgun guys, cacodemons, pyro knights and revenants to teleport in. Head past them to the teleporter and use it to get on the ledge above you, then walk north past some crates to find the red skull key on a plinth. Drop down to ground level and dispose of the super demons, super spectres and one or two arch-viles approaching from the east, then head back to the north side of the looping path where you found the armor and go up the steps here to a red key door. Go through the door and head round a corner, which will cause two closets containing shotgun guys to open - kill them then enter the east closet and press the skull switch inside it, which will raise the floor behind you and open more closets containing super imps and revenants. Press the lift to lower it again and kill an arch-vile hiding inside, then pull the chain switch it was guarding to open the south-west door leading back outside.

Follow the path south to a mancubus guarding a skull switch, which will raise a set of brown steps on the other side of the blood river to your left. Go up these steps and head east towards a mancubus waiting between two metal arches - passing under the second arch will reveal shotgun guys and revenants in front of you, along with shotgun guys and pyro knights behind you. Continue east past some crates with imps on them then turn right on to a walkway with two arachnotrons guarding a yellow key door. Halfway along the walkway is a doorway indicated by red strip lights - go through this doorway and approach the yellow skull key in front of you, which will cause the bridge leading to it to drop away, then walk round the platform to drop down to a blood pool with two flesh pits. Drop into the south pit and walk around it until a cyberdemon teleports in, then destroy it - this will cause the metal platform in the center to rise, forming a lift you can activate to get out of the pit.

Go back up to the yellow key platform to find that the bridge leading to the key has risen again; press the lion switches on the bridge to lower it so you can reach the key, then go back to the walkway and kill the released zombies and pyro knights in this area before opening the yellow key door at the south end. Step on either of the red X pads to finish the level.

* The vertex count without the effect of node building is 7784.