MAP10: Clear for Death is the tenth level of Memento Mori II. It was designed by Matthias Worch and uses the music track "Backroad Wanderer" by David "Tolwyn" Shaw. It contains a separate area for multiplayer competition.

Well, sorry to tell you, but you'll have to descent [sic] into the sewers again. Your goal is area 11, but the entrance is located in sector 10 in an old sewage-farm that has been overtaken. The way into the actual sewage-system is secured by keycards - maybe you'll have to find them first. 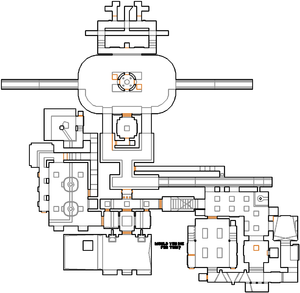 Map of Clear for Death
Letters in italics refer to marked spots on the map. Sector, thing, and linedef numbers in boldface are secrets which count toward the end-of-level tally.

Walk forward and open the door in front of you. Kill the zombieman and shotgun guy ahead, then deal with the imps in cages on either side. Continue forward into a corridor, with more zombiemen and shotgun guys to deal with. Head east and go through the big silver door, beyond which is a flight of steps down. Kill the cacodemon ahead. You may also alert some spectres (up to five) and even more former humans, so use the staircase to funnel them in for easy pickings.

Once they are dead, head down the stairs and immediately turn right at the foot of the stairs to find a door. Go through that door into a new room with four computer panels, with even more two imps and even more former humans to deal with. There are two switches in this room you have to flip to open up the next area. Each one at the end of a raised walkway on each side of the room. Those familiar with Worch's previous works should smell a trap coming:

Once you have flipped both switches, head up the steps in the south into the corridor ahead. Three spectres will come for you, so have your shotgun or super shotgun ready. Continue east, past the room with the yellow key (you may want to kill the imps in there first), to where the corridor makes a bend. Up to two Hell knights are waiting for you in the next room (three in co-op. on Hurt me plenty and above), so back up and take them in the long hallway. After killing them, continue into another blue room with imps. Flip the skull switch in the corner, and the yellow key platform will lower.

Return to the room with the yellow key that you ran past earlier. Equip your rocket launcher (if available), face backwards (south) and pick up the yellow key. The walls opposite the yellow key room will open to release one (Hey, not too rough and below), two (Hurt me plenty) or three (Ultra-Violence and above) revenants. If you have rockets, you can trivialise this trap with a number of well placed rockets; if not, you might want to make a dash for the room with four computers - you stand a better chance of not getting punched to death in there.

With your yellow key in hand, backtrack to the corridor near the start of the level. Find the yellow door in the west and go through it, then through the big door nearby.

You are now in a room with two slime vats. Watch for two shotgun guys and a zombieman on the floor, and imps on the catwalk ahead. On Hurt me plenty and above, you have a priority threat - a chaingunner or two. Kill them all and proceed through the door in the east wall.

This next corridor has up to three demons and two spectres. The super shotgun should make short work of them in this tight space. Continue all the way forward into a room with a rectangular slime tank. The blue key is in the slime, but out of reach. The room has two pain elementals. On Hurt me plenty and above, there are two imps in ambush to the right of the doorway; on Ultra-Violence, there is an additional shotgun guy who will attack as soon as you enter. A shotgun and super shotgun works wonders here. Once the room is clear, walk into the red alcove at the top of the stairs.

The blue key will have disappeared from the rectangular slime tank. To retrieve it, backtrack into the corridor and head west at the T-junction. Use the metal-striped floor in front of you as a platform and ride it up. You are now on the catwalk in the room with two slime vats. Proceed all the way forward to a switch, flip it and immediately turn around - the corner behind you will open up with three (four on Ultra-Violence) chaingunners.

The blue key will now appear in the northern vat. Jump down from the catwalk, and use the step to the vat's west to climb up and grab the blue key.

Backtrack to the corridor near the start of the level. Open the blue bars to the north. Step onto the platform, and press either switch to lower the platform.

You are now in a sewer-like area. Stay out of the slime, it hurts. As soon as the platform finishes lowering, you will be set upon by some demons and two imps (on Hurt me plenty, there is one spectre; on Ultra-Violence and above, all the demons are spectres). At the fork, go left and find a silver door. Go through this door into a room with a teleport pad, take a peek in, then immediately back out - you don't want to fight the baron of Hell inside within such close quarters. Once the baron is dead, pick up the box of ammo and box of shells, then go through the door ahead.

You are now on a catwalk overlooking a large oval slime pit. Kill the imps on either side, deal with the pain elemental that emerges from a hole in the wall (two on Ultra-Violence), and snipe any shotgun guys and imps taking potshots from the window in the north. Drop into the slime (beware of the spectres), then hop into the teleporter in the west.

This teleporter takes you behind the window in the north of the slime pit. Kill any stragglers from earlier. As you head down the steps on either side, you will alert two (one on Hey, not too rough and below; three in co-op on Hurt me plenty and above) Hell knights. Quickly take them out before they box you in.

Walk into either passage in the north to exit the level.

In the room with four computer racks, to the east of the "Would you die for this?" sign (see Trivia), there are two switches which grant access to the next part of the level. Before the player reaches the western one, six silver bars lower, trapping the player for 30 seconds, while cacodemons teleport in. The trap can be thwarted by luring any monster onto the lowest step of the staircase. With correct timing, if the monster stands where one of the bars is supposed to lower, the bar will not drop. This gives the player more freedom of movement, as well as an opportunity to finish the level faster.

Upon picking up the yellow keycard some walls normally open, revealing enemies. By moving slowly and precisely towards the yellow keycard without crossing the center of the square platform it is placed on, it is possible to obtain it without triggering one of four linedefs (sides of the platform) and the walls will not open. 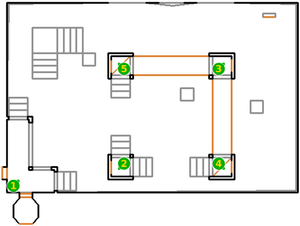 * The vertex count without the effect of node building is 1889.