MAP10: Containment Area is the tenth level of most console versions of Doom, based on the original E2M2: Containment Area with modifications made to adapt the level to the consoles' memory and storage limitations. The author of the conversion is American McGee, and the original map authors are Tom Hall and Sandy Petersen. The map first appeared on the Atari Jaguar, and was later ported to the 3DO, Sega 32X, Game Boy Advance, Sony PlayStation, and Sega Saturn consoles. Due to its original size, it is one of the most radically altered levels, with nearly half of the original geometry removed. 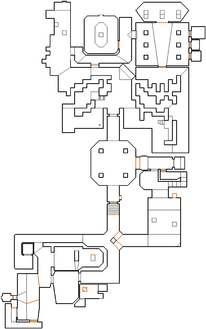 Red key and exit With the blue key, go forward and down the staircase to a blue door. Open it and turn right to see another blue door, behind which is the red keycard. Take it and head down the corridor to the four-pillared room. Go back up the staircase from this room again and go straight ahead at the crossroads. Follow the corridor through a large room and you will see a nukage pool in front of you, with the exit door on the other side. Turn left to see a red door in front of you - head through it and follow the room round to a switch. Press the switch to raise a bridge over the nukage to the exit door. Go back through the red door, cross the new bridge through the exit door and press the switch behind it to finish the level.

The yellow keycard in this level is optional, but is required to get to secret #1 (see below). After taking the berserk pack in the crate maze at the start of the level, instead of going through the metal archway to the south, walk past it and follow the path south, east and north around the crates. You will see a door at the end of the path - go through it and head straight forward. The keycard is past the room with six pillars, next to a backpack (this area also holds secrets #2, #3 and #4).

An armor pickup can be found on your right at the start of the level, along with a shotgun on I am a Wimp/Not Too Rough skill levels. A crate just in front of you holds a box of shells on those skill levels, or a shotgun on Hurt Me Plenty and Ultra Violence - you can reach these items by walking forward and pressing the switch on your left, which lowers the crate.

After reaching the crossroads past the rising staircase, go west and follow the corridor to the end. You will find a megaarmor in one corner, and a clip and two stacks of shotgun shells in a nearby closet.

There are two platforms in the nukage pool by the blue keycard, holding a stimpack and a box of bullets.

The room due east of the exit area contains an armor pickup and a medikit. 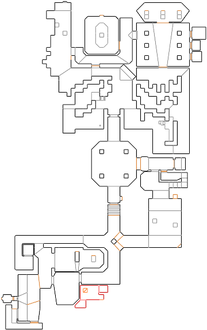 The unreachable chainsaw room is highlighted in red.

The chainsaw room is still present in some console versions and is normally inaccessible. Because the hallway leading to it was removed, it is normally impossible to get into this room and therefore to get 100% kills and secrets. In the Jaguar version, it is possible to clip into the area using a glitch with the rocket launcher. This was fixed in the PlayStation and Saturn versions, which remove the orphaned rooms.

One barrel (thing 90) has no flags set for any of the three difficulty classes, so it does not actually appear in the level.

Of all the levels ported to consoles, Containment Area is among the most radically altered. Around half the playable area was removed, along with geometry simplification in the remaining areas and texture changes to reduce the number of unique textures used.