MAP10: Cosmodrome is the tenth map of Plutonia 2. It was designed by Thomas van der Velden, and uses James Paddock's music track "Astral Dreadnought", which is also the name of the original creature in Dungeons & Dragons that inspired the Cacodemon. The par time defined in MAPINFO is 1:30. 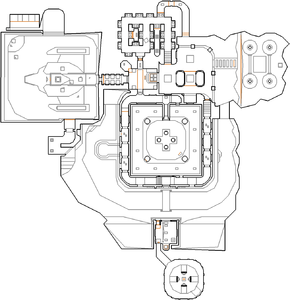 Map of Cosmodrome
Letters in italics refer to marked spots on the map. Sector, thing, and linedef numbers in boldface are secrets which count toward the end-of-level tally.

Go through the teleporter behind you. Shoot down the zombiemen here and then press the switch. The aircraft will fly far above you and compartments to the north and south will open with many monsters inside. Clear the area and drop into the loading bay. The door opens as you approach it, so head in, get rid of the arch-vile, press the switch, and then use the teleporter to be back where you were before. The southern monster compartment has an opening, follow the path behind it to a large open area with a large UAAF building. Its entrance is on the south side, so cross the bridge picking up the super shotgun along the way and enter. Climb the stairs and follow the path all the way around until you drop into the center of the building, where you find chaingunners and a switch. The switch exposes you to cacodemons, demons, and mancubi. In the expanded area, flip the switch on the southwestern column, which opens a way out to the northeast, back to the walkway.

A new opening is revealed to the right, so go through there, and over the bridge (this was the same area with an arch-vile and a teleporter) to the next room. There are several shotgun guys and zombiemen stationed here, in a similar manner to that one room from Refueling Base. Kill them as you make you way to the next area. A compartment opens up revealing pain elementals and a Hell knight, and there are also mancubi present. If you grab the rocket launcher, another monster-filled compartment opens. You will see the blue keycard on the opposite side of gap, with lifts constantly going up and down between the section you are on and the one on the opposite end. Use them to cross over, and watch out for the cacodemons that attack you. After getting the key, cross back, and then open the blue door. Kill the arch-vile in front of you and take the walkways back out of the UAAF building. Cross the bridge and open the blue door, taking the lift up. You will notice that this area was your actual starting point, and that you are on the other side of the fence. Flip the switch to lower into the exit room, where you will find several monsters guarding the exit.

* The vertex count without the effect of node building is 2296.