MAP10: Culture et Confiture de Mobs (English: Culture and Jam of Mobs) is the tenth map of 3 heures d'agonie 2. It was designed by Jean Bon (Jambon) and uses the music track "La bohème," originally composed by Giacomo Puccini and remixed by Charles Aznavour. 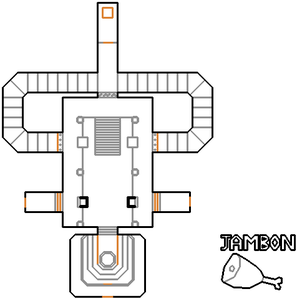 Map of Culture et Confiture de Mobs
Letters in italics refer to marked spots on the map. Sector, thing, and linedef numbers in boldface are secrets which count toward the end-of-level tally.

* The vertex count without the effect of node building is 559.

The title plays on a French saying, originally coined by Françoise Sagan, "la culture, c'est comme la confiture : moins on en a, plus on l'étale", which can be translated as "culture is like jam: the less of it you have, the thinner you spread it". The original meaning can be likened to sayings such as "those who know don't talk; those who talk don't know". In a literal interpretation, the presence of the complement de mobs would change culture to its other meaning of cultivation. The title can therefore be interpreted either as a place where the monsters are distributed so as to give the illusion there are more of them than are actually present, or a place where monsters are grown so as to be reduced to pulp.