MAP10: Dog House C is the tenth map of Project Einherjar. It was designed by Mike MacDee (Impie) and uses the music track "". 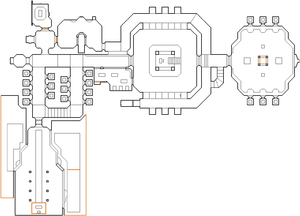 Map of Dog House C
Letters in italics refer to marked spots on the map. Sector, thing, and linedef numbers in boldface are secrets which count toward the end-of-level tally.

This prison block is a nonlinear collection of concrete halls: Juno can follow them in any order she wishes.

The left path eventually leads to the blue exit door, and a switch that raises the staircase to the command office at the center of the cell block, where an Administrator holds the yellow key. You can reach the office with a good jump, but the stairs make it much easier to access in a pinch.

The right path leads down the stairs and past the command office to the solitary cells. The wall switch here lowers the pillars and releases a Block Lord and Mommybots, along with the red key. Taking the key not only opens the all the cells (releasing an army of Ghosts), but also summons an Einherjar at the opposite end of the facility.

Both keys are used in the security room at the map's start to open the doors to Veidt's office (and the cells lining both hallways). Many of the cells contain useful items as well. Resupply before entering the office to grab the blue key: you'll need it all for the fight with the Sky Hounds.

Leave the office and return to the blue door to exit the level.

Veidt appears to have left during the chaos. Once you grab the key from her desk, the door seals you in, and the walls explode on either side of the room: two Sky Hounds begin bombarding you with rockets from the new windows. Eventually another wall explodes to reveal a third, if you fail to kill them quickly enough. They only attack by firing Einherjar rockets, but they fire them frequently and there is very little cover besides the narrow pillars lining the room. Eventually the door opens again and allows you to escape.