MAP10: Gothika 1024 is the tenth map of Congestion 1024. It was designed by Rachel Schmitz (Negatronica) and uses the music track " ". 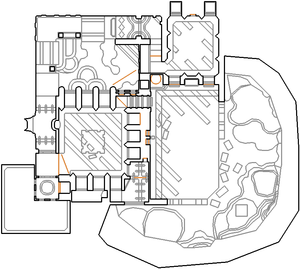 Map of Gothika 1024
Letters in italics refer to marked spots on the map. Sector numbers in boldface are secrets which count toward the end-of-level tally.

At the start, drop down into the room to your right. Wait for the walls to lower and flip the switch inside the northernmost alcove on the east side. Turn around and ride the lift up, then go right and drop into the area to your right. Step on the mud in the southeastern corner and wait for the textures on the southern wall to finish moving, revealing two switches. Press both and ride the lift out of this area. Continue to your right, following the hallway until you reach a room with a switch.

Use it, turn around and enter either opening. You should spot two yellow switches: remember their location then go to your immediate right and press the switch in the passageway. You'll arrive at the room with nine alcoves near the beginning. This time enter the easternmost alcove on the south side, make a hairpin turn to the left and press the switch. Exit the alcove and grab the yellow key on the northwestern side of the room. Now, return to the area with the two yellow switches and press the one on the left twice to reveal the exit teleporter on your right.

Six shotgun guys and two chaingunners inside a teleport closet outside of the map are not able to enter the map. This is because the blocks that prevent them from teleporting into the map (sectors 92 and 158 which have tags 22 and 16, respectively) have no corresponding linedef tags that lower them. Furthermore, the left side of sector 92 has a linedef with tag 23, however there is no corresponding sector in the map with tag 23 that would presumably allow the shotgun guys to teleport in.

* The vertex count without the effect of node building is 1889.