MAP10: Hangar is the tenth level of The Abyss. It is a modified version of E1M1: Hangar by John Romero, with additions by Miklos de Rijk (H2SO4). It features the original E1M1, with sections of the map mirrored, paths modified, and an outdoor arena fight near the true exit. This map, along with MAP31: The Temple, may explain exclusion from the idgames archive until 2015.

This map is considered to be a sign that not all places the player has traveled previously have been concrete. 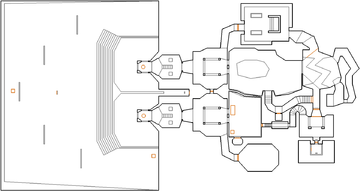