MAP10: Intermission is the tenth map of Community Chest 2. It was designed by Simon Broadhead (VolteFace), whose handle is misspelled "Volteforce" in the megawad's text file. 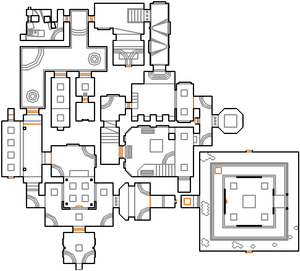 Map of Intermission
Letters in italics refer to marked spots on the map. Sector, thing, and linedef numbers in boldface are secrets which count toward the end-of-level tally.

Enter through the door into the dark plaza and head north. Take the east door and press the switch to continue on. Keep going until you reach the key, then backtrack to the plaza, watching out for more monsters in newly-opened closets along the way. Take the red door on the far left. When you walk down this hallway it will lower to reveal some enemies and a switch. Hit it and take the nearby lift up. The next switch opens walls around you. Head towards the blue key on your left, and you will be trapped with a demon, Hell knight, or baron of Hell depending on your difficulty setting. Flip the switch to escape and then flip the switch behind the blue key door to reveal the yellow skull key you were unable to access earlier. Go down and take the teleporter. Here, a cyberdemon (four barons of Hell on the easy setting) is in the middle square along with some lost souls. Press two switches on the north and south perimeters of the area to access the middle, and flip the switch there to remove the bars blocking the exit from this area. You will end up just behind the red door. Go back to the plaza and go through the yellow door to find the exit.